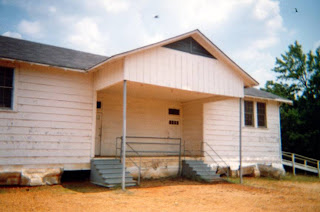 Rosenwald Schools are buildings across 14 South and Southwestern states that represent a cooperative, large-scale effort to educate black children from 1917 to the 1930’s, a time when there was no consistently available education for these students to speak of.
Julius Rosenwald was the son of Jewish immigrants in Chicago. He was a high school dropout who worked as an apprentice in his uncles’ clothing business. In 5 years he had his own business, and then earned enough capital that Richard Sears asked him to be a partner in the legendary Sears, Roebuck mail order company. In 1909 he became president/CEO. He also became one of the new ‘professional givers,’ or philanthropists (think Rockefeller or Carnegie).

Inspired by black educator and leader Booker T. Washington writing to him about schools as bad as stables (some in floorless shacks), he established the Julius Rosenwald fund in 1917 to improve education for black students by improving the physical plant in which it took place. To do so, he introduced the concept of matching funds. Black communities had to raise approximately a third of the money for their new school, local school boards, a third, and the Rosenwald Fund, a third.
Rosenwald Schools were named to the National Trust for Historic Preservation’s America's 11 Most Endangered Historic Places list in 2002. Bossier Parish had at least 13 Rosenwald buildings by 1932, according to a map from the Rosenwald Fund. There are a few possible Rosenwald Schools still standing in the Parish, most in very poor shape. One building that is holding
its own houses the North Bossier Civic Club on Highway 2 in Plain Dealing, pictured above. It follows the Rosenwald floor plan and is known locally as “The Rosenwald School”. However, we have not found any documentation to prove that it is one for historic preservation purposes, and the building may have been moved. If you have any information about this building, please contact us at the Historical Center. You could be saving a local treasure!
Posted by Pam Carter Carlisle at 11:39 AM