On January 26, 1861, the state of Louisiana seceded from the Union. This caused immediate changes in the lives of residents in the Shreveport and Bossier area. One of those changes was visible in the Shreveport newspaper, The Southwestern. You can see in the January 30, 1861 issue, the paper's masthead features the American flag. 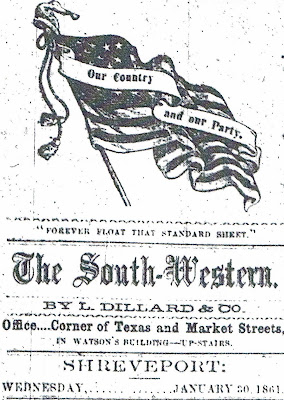 In the next issue (February 6, 1861), the flag has been removed. The editor notes that

As Louisiana is no longer a member of the federal government, we this day, as orderly citizens, lower the "stars and stripes" from our masthead! It is with heart-felt emotions, better imagined than portrayed, that we fold the saucy looking "star spangled banner" that we have always loved, and place the precious memento under our pillow.

From this description, we understand the notion that many newly seceded Confederates had - that the disagreement over slavery would be quickly resolved and peace negotiated. For currency notes printed by the Confederate States of America, each note was redeemable after the ratification of a treaty of peace between the Confederate States and the United States of America. As the war progressed, it became clear to Confederate leaders that President Lincoln would only negotiate a complete surrender. In his book, The Atlas of the Civil War, James McPherson writes that "to every proposal for an armistice or preliminary terms, Lincoln replied that the Confederates must lay down their arms, give up slavery, and rejoin the Union." Bossier had an enslaved population of 8,000 individuals in 1860, much larger than the free white population of approximately 3,347. The abandonment of slavery was paramount for Lincoln and this was an issue that would directly affect the way of life for the residents in Bossier Parish.
Posted by Marisa Diedrich Richardson, Curator of Collections at 10:38 AM