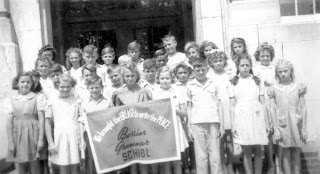 Mrs. Bonvillion's fifth grade class in 1944 at Bossier Grammar School standing behind a small banner that proclaims "We brought the GREASE to write the PEACE." 2006.013.001

In Northwest Louisiana throngs cheered the arrival of peace with joyous, noisy celebrations. The three and a half year war had cost Caddo and Bossier Parishes an estimated 1,000 casualties—some 300 of them killed, captured or missing. President Truman’s declaration of a two-day holiday closed local businesses and expressions of gratitude in church services and a city-wide service at Shreveport’s Municipal Auditorium. As soon as Shreveport received word of the surrender, all restraint was cast aside. Confetti and scraps of paper floated down from windows of office buildings, laughter and tears intermingled, car horns blared, church bells rang and firecrackers burst. Traffic did not move, gasoline rationing was forgotten, sidewalks were lined with thousands of soldiers and civilians and switchboards were swamped. Amazingly, the crowds were comparatively orderly.

Bossier’s celebration of America’s return to peace was described in The Shreveport Times issue of August 15, 1945. “From the new traffic bridge to the far reaches of the town, Bossier City last night cheered the news ‘the war is over,’ and within seconds of the official flash, Barksdale Boulevard, the city’s main thoroughfare, was a continuous string of cars, horns blowing, occupants yelling. Stores closed their doors in accord with requests of city authorities. Bars quickly closed their doors.” The war was over and Bossier City Mayor Hoffman Fuller recognized that every Bossier City citizen had cooperated to make the war effort in the city and parish a complete success.

To establish an annual day of remembrance and national renewal, August 14th has been established as “National Spirit of ’45 Day.” This Sunday will see celebrations all over the United States as we remember.

Posted by Pam Carter Carlisle at 9:07 AM