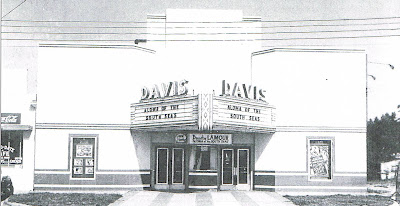 Photo of the Davis from Clif Cardin’s book, Images of America: Bossier Parish.

We received an inquiry about the Davis Theatre, which was located at 915 Barksdale Boulevard in the 1940s. With that basic information, we were able to begin a hunt for information. A few photographs of the theatre are in our collection, including one of an unknown woman and child standing in front of the theatre marquee. The Davis is showing a movie called “The Gold Rush”, which was a 1925 Charlie Chaplin silent film about a prospector in the Klondike Gold Rush. It was rereleased in the US in April of 1942 with a musical score and narration by Chaplin.

Historical Center staff member Laurie Dyche worked to find any newspaper articles regarding the theatre’s opening. In order to get a better idea of when the Davis opened, she checked our collection of city directories. The directory listing for the Davis also included the name of Don and Darrell George, brothers who owned and operated the theatre. A quick internet search on the George brothers resulted in the discovery of a court case involving Don George and Paramount Pictures. Paperwork for the case shows that the brothers owned the Davis from May 17, 1942 until January 1, 1947. With this new date established, Laurie looked through our microfilm collection and found the article we needed in the May 14, 1942 issue of The Planters Press, “New Davis Theatre Opens Sunday 1 p.m.” It provides a wealth of information about the motion picture house.

“The new Davis Theatre owned by Mrs. J.E. Davis [Mary Paulk Davis Gresham], a resident of Bossier City, stands as one more example of her far-sighted confidence in the future growth and development of this prosperous community. Started during the early days of the war, and completed under the trying conditions created by the all-out war effort, this theatre will probably be one of the last privately owned motion picture houses built for some years to come…Mrs. Davis and her lessee exhibitors, Messrs. Don and Darell George, have spared nothing in an effort to give the people of Bossier Parish one of the country’s finest small theatres.” The article describes every inch of the new theatre building that was designed by Peyton and Annan Architects with building contractor A.J. LeVasseur. The Davis was air-conditioned, equipped with fire prevention devices, and could seat 702. “The attraction sign of blue and cream porcelain enamel, opal glass, three-dimensional aluminum changeable letters, and Neon tube lighting forms the central feature above the marquee.” The lobby was painted light coral and maroon with gold light fixtures. The Planters Press article ends by writing “everyone in Bossier appreciates the addition of this institution of education and amusement and will attend regularly.”

If you have memories of the Davis Theatre, please let us know! We would love to have more information about the Davis and other entertainment venues in the Bossier area, like the Southland Theatre (also on Barksdale Boulevard). If you are willing to share your photographs, antiques, or stories with the Historical Center, please contact Marisa at 746-7717.
Posted by Marisa Diedrich Richardson, Curator of Collections at 11:17 AM