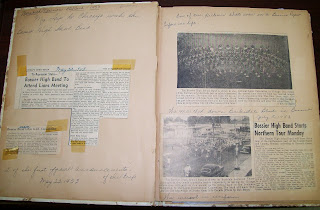 This October, we received an interesting donation of material of the Bossier High School band from the early 1950s. This donation included a photograph of the 1954-1955 band, two recordings of the band’s performance at a Natchitoches festival, a program for the 1953 cadet and concert band spring concert, and a scrapbook that chronicles the BHS band’s trip to Chicago. The scrapbook provides a wealth of information about the band’s trip in 1953.

The Bossier High School band, which was under the direction of Mr. Kenneth L. Green, attended the Lions International convention in July of 1953. The band was selected by the Louisiana Lions Clubs to represent our state in competition with dozens of other bands from across the nation, as well as from foreign countries. The band participated in a parade down Michigan Avenue in downtown Chicago and won second place in the 56 band competition. The musicians then completed an eleven day educational tour on their bus trip back to Bossier. The band performed additional concerts on their journey, including one at baseball stadium Comiskey Park, where the Chicago White Sox played the Cleveland Indians. The students traveled to Director Green’s hometown of Michigan City, MI, then to Toronto, Canada, and Niagara Falls. The band then went to Cincinnati, OH and made their final stop in Savannah, TN before returning home. A group of band mothers raised funds for the journey.
Posted by Marisa Diedrich Richardson, Curator of Collections at 3:34 PM