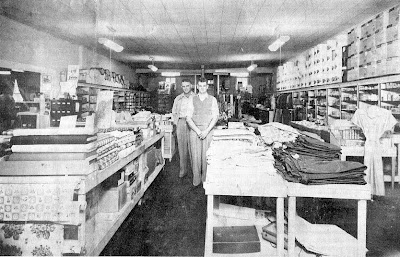 Henderson Winham, foreground, and his brother Ben are shown in their Plain Dealing dry goods store in 1946.

In July of 1987, Mr. Henderson Winham, a 75 year old native and life-long resident of Plain Dealing compiled a history of the Winham Family. Derived from aged newspaper clippings, family Bible records, conversations with other family members and stories that were related to him by his grandmother, Elmina Smith Winham, the history begins with the departure in the fall of 1845 of 236 souls from Houston County, Georgia. After a long and arduous journey, the party arrived in Minden on Christmas Day where they were met by a leading merchant of Minden, John Chafee. A sumptuous Christmas dinner was enjoyed before the families proceeded on to Bellevue, then Sugar Hill the next day.

Each family left the party to settle in different parts of North Bossier Parish, with Reverend Allen Winham and his family settling near Rocky Mount. A year later he founded the Caney Creek Baptist Church, believed to be the first Baptist church in North Louisiana. Reverend Winham was also instrumental in the founding of Salem Baptist Church and Red River Baptist Church.

Recalling his grandmother Elmina with great fondness, Winham related how he prepared black gum toothbrushes for her to enjoy her dips of snuff. “… to enjoy a dip of snuff, one needs a black gum toothbrush. The way to fashion such a toothbrush is to cut a twig from a black gum tree about 3 inches long and the thickness of a kitchen match, peel the bark back 1 inch from the larger end, and then chew the end until it becomes a soft mop. Then thoroughly moisten that mop, dip it deep into that can of exotic powder, and bring it out laden with the same. Place it in the mouth, run it all around the gums; then anchor it in the back of the jaw and sit back and rock – That is pure pleasure.” As his grandmother was toothless, Winham prided himself on preparing the toothbrushes for her.

In his childhood Winham first attended the New Brushy School, and then later attended the Alden Bridge School. The original Brushy School and Church were located west of the present Sunflower Church on Highway 3 in Bossier Parish. Brother Holliday, minister of the Plain Dealing Methodist Church, was often invited to preach at the Brushy Church. He was known to readily pack his Bible and his nightshirt and spend Saturday nights with the Winhams so that he could preach at Brushy on Sunday.

Both of Winham’s parents were hard-working and God-fearing. His father was recognized as a mediator in the community to whom people frequently went for advice and help in resolving problems. A.B. and Lilla Mae Winham had 12 children, 10 of whom grew to adulthood. In this memoir Henderson Winham relates particular memories of all of them.

Winham devotes the final pages of his memoir to his own recollections of growing up in North Bossier Parish. By age 12 he had become the family chauffeur, even attempting to teach his mother to drive the 1924 T Model Ford Touring Car that his father purchased. “My mother had an earnest desire to learn to drive – she never accomplished it. I would drive out into the open pasture and turn the wheel over to her. She went about it in a very determined way, but while she was looking down trying to decide the pedal on which to place her foot, the car invariably got out of control. Some candid camera shots of her facial expressions at such times would be quite entertaining. Though Mamma could do many things, and do them well, she never mastered the Model T, and sorrowfully abandoned the attempt.”

This is a poignant memoir that reflects the lives of a North Bossier family in the late nineteenth and early twentieth centuries. To read more about them and other Bossier families, visit the Bossier Parish Library Historical Center.
Posted by Marisa Diedrich Richardson, Curator of Collections at 2:30 PM