Photo of the Month - September 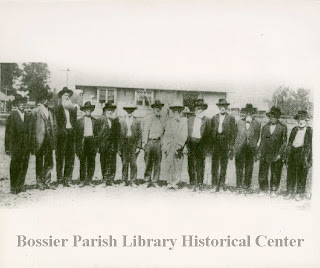 September’s photo of the month shows several of the Confederate veterans of Bossier Parish. With our new RELIC program, “Making Sense of the American Civil War”, starting this week, it is a good time to look at the impact the Civil War had in Bossier Parish.  This photo, taken by Plain Dealing resident John H. Allen, features thirteen men standing in front of the Cotton Belt Depot in Plain Dealing. The photo dates from around 1916. The men were departing for a reunion in Chattanooga, Tennessee.

The Bossier Banner ran the photo in an attempt to identify all of the men. Several readers wrote in with their identification lists, but upon closer inspection, it seems that not all of the men in the photo were old enough to be veterans! It is more likely that residents of Plain Dealing who were waiting around the railway station with their veteran friends were invited to come out and stand with them for a photograph. Of all of the names identified by Banner readers, only the following named are veterans of the Civil War: James A. Ford, Capt. John Hall Nattin, William Milton Plexico, Martin H. Brock, Hartwell Marion Matlock and Rufus Allen. Here is some quick information about the men and their final resting places in Bossier.
James A. Ford died in 1921 and is buried in the Plain Dealing Cemetery.
John Hall Nattin enlisted in 1861. He died in 1923 and is buried in the Cottage Grove Cemetery.
William M. Plexico died in 1936 and is buried in the Rocky Mount Cemetery.
Martin H. Brock enlisted in Bellevue in 1862.
Hartwell Marion Matlock died in 1938. He had served as a Justice of the Peace for several terms and was a successful farmer. Upon Matlock’s passing, the Plain Dealing Progress noted that only two of Bossier Parish’s Civil War veterans remained  Gen. O.R. Gillette of Bossier City and Col. Elam S. Dortch of Haughton.
Rufus Allen died in 1927 and is buried in the Salem Cemetery in Plain Dealing.
Posted by Marisa Diedrich Richardson, Curator of Collections at 2:22 PM