The January 24, 1957 issue of The Bossier Banner-Progress reported on a tornado that struck Princeton.

“Three persons were killed and nine injured in a tornado which struck in a farming community of Princeton Tuesday morning at 11 o’clock.”
“All of the dead were Negroes and were dead on arrival at hospitals in Shreveport.”
“The dead were Allison Law, 66, and his wife Mary Ann Law, 68, and Ruth Bradford, 6 year old Negro baby.”
“The injured hospitalized were all Negroes of Princeton.  They were Barbara Stinson, 8, fractured hip, condition serious; David Washington, 60, fractured hip, condition serious, Charles Bradford, 4, possible head injuries, condition fair; Bernice Bradford, 26, mother of the dead baby, head injuries, condition fair.”
“Eddie Brutus, 56, back injury, condition undetermined, Josephine Johnson, 64, lacerations, given emergency treatment and discharged; Gusspie Platt, 45, head laceration, not serious; Vernon Lee Woods, five, head injury, condition satisfactory.”
“J. J. Thomas, white, of Princeton, suffered minor injuries but was treated by a physician and not hospitalized.”
“The dead and injured were all rushed by ambulance to Confederate Memorial Hospital with the exception of the Woods baby, who was hospitalized at Minden, and Thomas.”
“The storm struck with fury and during a heavy downpour of rain several homes were destroyed and the twister narrowly missed the Princeton school which has 800 students in elementary and high school grades.  Had it struck this building the damage might have been enormous.” 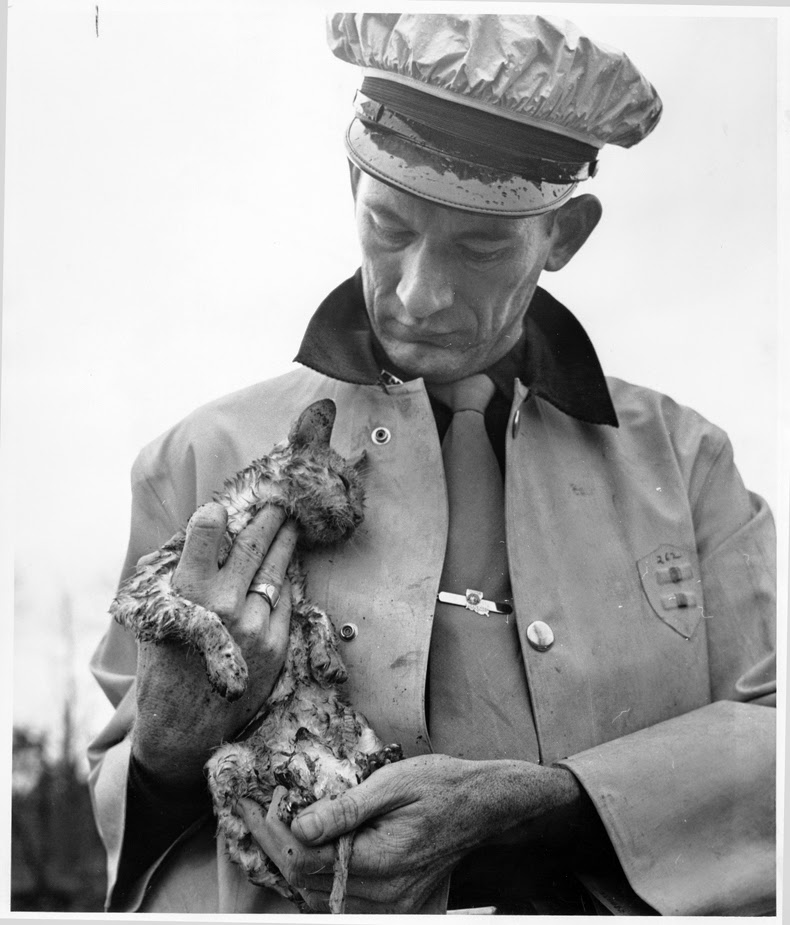 This Louisiana State Trooper holds a kitten, the only survivor from the Law household.  Photograph courtesy of LSU-Shreveport Archives and Special Collections, Noel Memorial Library, Henry Langston McEachern collection. Please do not reproduce image without permission.