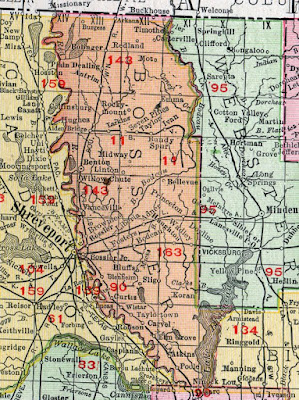 As the 175th birthday of Bossier Parish approaches in 2018, the Bossier Banner-Progress reported on the history of the parish and how the 110th birthday would be celebrated.

“The one hundred and tenth anniversary of the founding of Bossier Parish will be observed at Benton next Tuesday, February 24. Two ceremonies marking the event will be held. The Benton Lions Club will have a special talk on the history of the parish given by Rupert Peyton, associate editor of the Banner-Progress, at the Court House Café at noon.”

“At 2:30 p. m. a ceremony will be held at the Benton High School auditorium to which the general public, civic and patriotic groups and the North Louisiana Historical Association will be especially invited.”

“Mrs. Mamie Edwards McKnight of Benton has been named chairman of the program at the school auditorium which will also be highlighted by a review of the history of the parish by Peyton.”

“Special invitations are extended to former residents of Bossier to attend the ceremony. The use of the auditorium was extended by S. Hudson Johnston, principal of the school.”

“Bossier Parish was created by Act 33 of 1843 of the Louisiana Legislature and was named for Gen. Pierre Baptiste Bossier, then Congressman for this district. When Louisiana was admitted to statehood Bossier was a part of Natchitoches Parish. In 1828 it became part of Claiborne and in 1843 it was carved out of Claiborne and its eastern boundary extended to Dorcheat Bayou. In 1873 Webster Parish was created out of portions of Bossier, Claiborne and Bienville Parishes and its eastern boundary was moved to Bodcau.”

“The first parish seat was Bellevue and it was moved to Benton in 1888.”