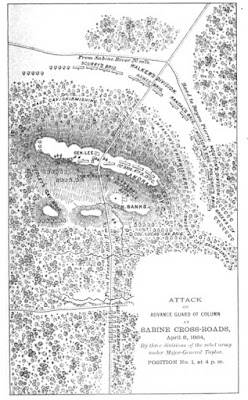 A column in the June 25, 1953 issue of the Banner-Progress told of a woman from the small town of Pelican, Louisiana in Desoto Parish who claimed that the last shot of the Civil War was fired in 1945.

“When was the last shell of the Civil War shot?”

“Mrs. Rust fortifies her claim in the following statement which she sent to the Banner-Progress: A good many years ago while Mr. Spencer Phillips was principal of the Pelican High School, one of the students brought him a shell that had been picked up in the woods along the Jefferson Highway between Pelican and Mansfield. Mr. Phillips liked relics of past history, and found the shell one of the type used in the Civil War, so it was obvious that the shell had been lost by a soldier who engaged in the battle of Mansfield:

“The shell was placed in a cabinet used to store Indian relics and other objects of past history. On May 5, 1945, Mr. A.E. Robinson, who was then principal of the school, on examining the shell, decided it had not been shot. He gave it, with other refuse, to the janitor [S]am McGraw, to be burned in a wire basket. In a few minutes such an explosion burst out that workmen and citizens came running to fin[d] out the cause. Mr. Robinson says that Sam McGraw, the janitor, fired the last shot of the Civil War, 81 years late.”

Have some fun with local history by visiting the Bossier Parish Library Historical Center.