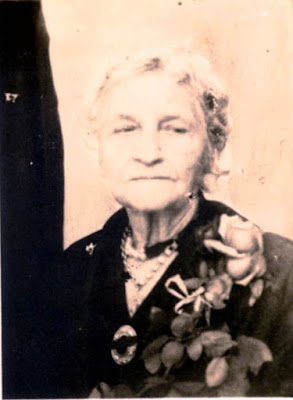 The April 11, 1947 issue of the Plain Dealing Progress ran yet another tribute to Mrs. Mollie Banks Gray.

“In his inimitable and versatile style, Rupert Peyton is this week paying a most just and merited tribute to one of North Louisiana’s greatest characters, Mrs. Mollie Banks Gray.”

“Without presuming to assume a counterpart role in this just ecomium to ‘Mamma Gray,’ the editor, being one of those who spent many happy days under her faithful guardianship in his early sojourn in Plain Dealing, feels that he must add just a little to the very pertinent observations of Mr. Peyton.”

“To us, as the local school head, she is always the embodiment of that appellation accorded her and that most beloved character, J. T. Manry, the ‘Maximi Amici’ of the Plain Dealing High School. This attribute was given in 1940 at a great spring field day. It goes without saying. No one has ever challenged this appellation.”

“In lighter vein, never will fade from our memory this scene: Polly seated on Mamma Gray’s shoulder or on the marginal limits of the piano’s keyboard, head bobbing up and down and responding to Mamma Gray’s exhortation of ‘Sing, Polly,’ with the most mystifying shrieks or squeaks ever heard by mortal man, strangely harmonized to the martial notes of ‘Dixie’ or the lamentative tones of the ‘Mocking Bird.’ No one ever questioned the reality of Polly’s singing on such occasions.”

“Polly, however, before migrating to Plain Dealing, had definitely been contaminated by city ways and speech, and many were the times when with the visiting persons present—and they were always welcomed at the Gray hostelry—Mamma Gray would receive her greatest shocks, for Polly’s singing would suddenly be turned into anathemas not to be matched by those of the proverbial sailor. No, with all her prayers and efforts on her behalf Polly never became a ‘Christian.’”

“Reverting to Mr. Peyton’s observation that the Gray Hotel was always the haven for school teachers, it might be added that while the kind hostess made no claims of running a matrimonial bureau, nevertheless her batting average at this point is authoritatively claimed to be 100 per cent. We are not here prepared to dispute it, either.”

“Finally, thank you Rupert. We have never published an article with the eclat that this has given us.”

In the upcoming 2 weeks issues of the Bossier Press-Tribune you can read the above referenced article by Rupert Peyton. And, to find out more about Mollie Banks Gray, visit the Bossier Parish Library Historical Center