The Saga of Sawyer Downs - Part 1 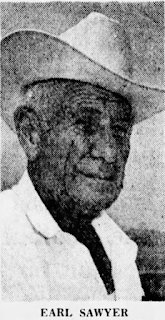 Earl P. Sawyer was a native of Hamburg, AR, but he came to Bossier City in 1945, where he lived the last 24 years of his life. Sawyer was a wealthy entrepreneur known for organizing the Tri-State Oil Tool Company Inc., here in Bossier City, along with his partner Gary H. Burnham. He was a prominent member of the Palmetto Country Club where he served in various positions on the board including president for at least four consecutive years from 1960-1963.

Sawyer also owned a horse-training facility in Mansfield, La., and was already well-known throughout the Ark-La-Tex as a horse trainer. In 1962, he invested $100,000 into a new horse-training stable with an arena just 2-miles south of Benton, La. on Benton Road. This new facility, known as Earl Sawyer Quarter Horse Ranch and Arena, covered nearly 40,000 square feet with the ability to accommodate all-weather horse shows. After completion of the new facility, he relocated his horse training facility to the new location and began hosting shows there in 1963. His entrepreneurial spirit combined with his love for horses birthed what would become Louisiana Downs.

Earl Sawyers Arena grew in popularity and was transformed into an oval and straightaway. On June 12, 1965, it opened as Sawyer Downs and became the south’s newest and most modern quarter horse and thoroughbred racetrack. Modern features seen at Sawyer Downs were electric timers, photo finish cameras, and automatic starting gates. A judges’ stand was erected atop a 50-foot tower behind the new grandstand that could seat 2,500 spectators, with a modern concession stand underneath. 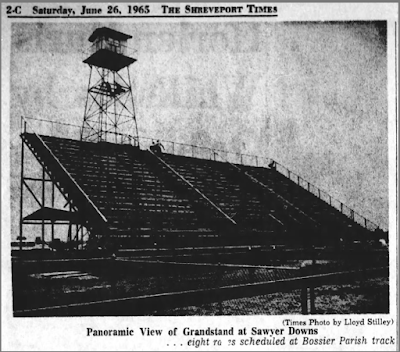 Its inaugural meet held that day was an 8-race event ranging from distances of 250 to 550 yards. Both quarter horses and thoroughbreds competed in the opening events which ran under the American Quarter Horse Association and the Louisiana Racing Commission. These races were held bi-weekly and were very popular drawing in large crowds that filled the grandstands.

Earl Sawyer applied to the Louisiana Racing Commission to allow pari-mutuel wagering at Sawyer Downs and the commission issued a letter of intent to okay his request. But first, the track would have to meet specific requirements such as an enlarged grandstand, fence rails to protect the horses, and a clubhouse to name a few of the requirements. Sawyer began making the necessary changes, and on April 4, 1966, the Louisiana Racing Commission granted Sawyer Downs a 90-day racing season for pari-mutuel betting from October 11, 1966, through February 11, 1966.

Meanwhile, Sawyer purchased more land and worked to secure financing for the necessary updates the Downs needed, which included a visit from movie star Gene Autry. Rumor has it Autrey came to see Sawyer Downs, and to consider being an investor in the racetrack, but he wanted the largest slice of the pie when it came to ownership, and Earl Sawyer was not willing to agree to these terms.

By June of that year, Sawyer announced the construction on Sawyer Downs expansion would begin soon. The new and improved facility would have the ability to stable more than a thousand horses, would include jockey quarters, a 3,000-foot runway for airplanes, a press box, judges’ quarters, a clubhouse with two clubs, as well as 18 suites that would be available for lease. Sawyer Downs became incorporated and started to offer stock in the company. After incorporating Sawyer Downs increased the size of its Board of Directors by adding six seats to the board. Two of the new board members included actor Dale Robertson and Joe Bill Adcock, baseball player for the California Angles.

Unfortunately, finances, religious opposition, and politics were working against Sawyer Downs, and in August of 1966, the racetrack had no choice but to ask the Louisiana Racing Commission to allow them to reschedule their opening from October 11, 1966, to April 1, 1967. In October of 1967, Governor John McKeithen blocked the permit that had been issued to the track and ordered that no racing permits of any kind could be issued without his personal approval. None-the-less the racetrack re-applied in August of 1968 for a new permit which was denied. It would be April of 1969 before Sawyer Downs could make a new request.

Before Earl Sawyer could realize his dream of re-opening Sawyer Downs as a pari-mutuel betting racetrack, he suffered a heart attack. On the morning of July 4, 1969, Earl P. Sawyer died at the age of 62 at Bossier General Hospital.

Come back next week to finish reading this saga of Sawyer Downs. As always, to learn more about Bossier Parish history come to the Bossier Parish Libraries History Center, 2206 Beckett St., Bossier City.