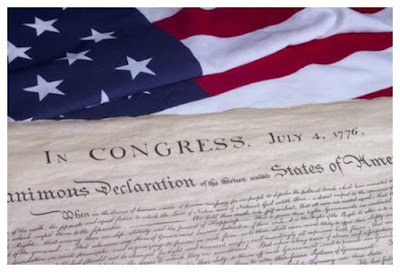 In celebration of Independence Day, I wanted to share this sentiment that was published in The Bossier Banner on July 4, 1895.

“Another Fourth of July at hand! The speeding years bring round this great anniversary of brave deeds and brave results so rapidly that the music of our celebration scarcely dies away in the distance before we begin it all over again.”

“Not one of the founders of our government dreamed of the magnitude or political significance of their undertaking. They were noble souls who ministered to the aspirations of thirteen colonies, and in doing so builded far better than they knew. It is safe to say that when king George signed the document which cut us loose from his sovereignty he unconsciously put his name to the death warrant of tyranny and oppression everywhere. No stroke of pen in royal hand ever meant so much for the progress of mankind. No autograph was ever written with greater unwillingness, for the feeble folk whom he professed to despise had driven his trained legions from the field, and the raw troops which were without discipline and without food had wrung a historic victory from his most trusted generals.”

“It will do no harm to recite these facts, not in the spirit of wanton boastfulness, but of grateful appreciation. They not only stir our pride but rouse us to a sense of personal obligation. We have inherited a noble territory, but better still, we are the fortunate heirs to certain immortal ideas which are to be defended against all comers, at all times and at all costs.”

“It is a holiday, but the pleasures of the hour are simply the panoply which covers the love of freedom that has made the nation unique and powerful. We greet its annual appearance with music and processions and speeches; we fill the air at night with blazing rockets, which carry the news of our prosperity to midheaven and then burst in rainbow hues as though they could no longer contain themselves at the joyful tidings; but beneath the noise of celebration, far down below the laughter and merriment of the people, is the thought of our indebtedness to those providential men who risked their all and followed the bugle note to the grave.”

“We have great privileges, but great duties also. Institutions have no inherent power of permanency. They begin to crumble when manhood and patriotism crumble. They rest on the shoulders and hearts of the multitude, and if the hearts fail or the shoulders grow weak the institutions totter to their fall. The America of to-day is dependent on the Americans of to-day; the America of to-morrow will be whatever the Americans of to-morrow may choose to make it. Nothing is so sensitive to public opinion as national institutions. Chamelion [sic] like, they take the color of the people who live under them. They do not make a people; the people make them.”

“No truer or more impressive words were ever uttered than those of Curran, who said, ‘The conditions upon which God hath given liberty to man is eternal vigilance.’ The Fourth of July, therefore, means watchfulness. A generation of neglect would mean a crack in the wall of our temple. — Amid the hurry and bustle of business we must give a passing and a serious thought to our country. The flags which will wave from Atlantic to Pacific, from Gulf to lakes, will fill the air with the mute eloquence of duty, and the sunshine which will fall on the tombs of our never to be forgotten heroes of ‘76 will be an appeal to cherish the memories of the past while we enjoy the blessings of liberty to-day.”

“Let fun and jolity [sic] prevail. No nation can as well afford to laugh and be glad as we. We envy no one, and have plenty within our borders. Peace and prosperity are guests in our household. But the still small voice whispers a word of timely warning, that as private honesty is the source of personal happiness, public integrity is the foundation of national permanency.”

Have a safe and happy Independence Day celebration!