The Panic of 1873 and the Palmetto Plantation Lottery

Industrial capitalism brought about the Panic of 1873, the first global depression which reached the United States in the fall of that year. The tipping point in the United States came when Jay Cooke and Company went bankrupt. They were the federal agent for the government financing of railroad construction. Railroad construction was the nation’s largest non-agricultural employer during that time. When Jay Cooke and Company closed their doors on September 18, 1873, it created a domino effect where many other banking firms and industries also became bankrupt. The New York Stock Exchange closed for ten days, credit dried up, and foreclosures were common. Railroads went bankrupt, factories closed, and countless other businesses failed, causing the unemployment rate to rise to an alarming 14 percent. 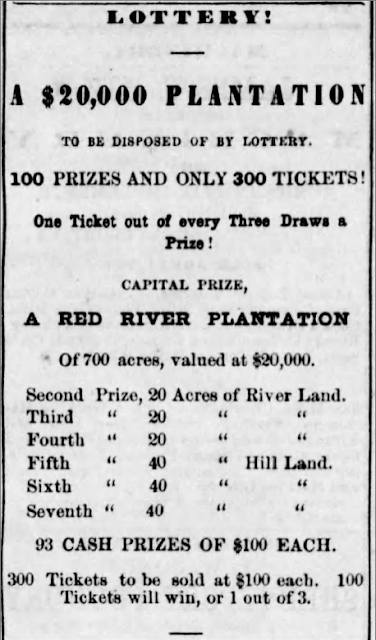 During the first year of this crippling economic depression, John C. Vance held the ownership of the Palmetto Plantation in north Bossier Parish, which had been in the Vance family since 1850. It was first owned by John Vance’s Father Allen Vance, a wealthy planter from Abbeville District, South Carolina. When Allen died in 1865, he left his estate to his wife and children with instructions not to sell the plantation until after his youngest daughter, Laura Elizabeth a.k.a. Nina reached the age of eighteen.

John Vance renamed the plantation “Palmetto,” after the official nickname of his home state South Carolina, “Palmetto State.” However, the name was not changed legally and remained as “Allen Vance Plantation” in legal documents. The plantation was divided into river land and hill land by the Flat River Bayou, which traversed the plantation.

Starting on April 15, 1873, a long-running notice could be found in The Shreveport Times that John Vance was looking to change the business he was in and wanted to sell the plantation. Seeing how the nation’s economics were in dire straits and citizens had lost their trust in the banking system, and with credit not being a feasible option John opted to conduct a lottery in hopes to sell the plantation for cash during this financially depressed period.

John described the plantation in the following way: “...The place is situated in the Red River bottom, 2-1/2 miles from Benton, 11 miles above Shreveport, one mile from the river, and the survey of the Camden and Shreveport railroad just made, runs through these lands one-half mile from the ginhouse and dwelling, where a depot will probably be located. The place is also on the line of the contemplated Oklahoma railroad, and adjoining and surrounded by lands of J. B. Pickett, W. C. Vance, Dr. S. W. Vance, Mrs. M. G. O’Neill, John M. Arnold, and W. R. Prather. All the lands offered are first-class Red River bottom, entirely free from overflow, and the plantation has upon it plenty of labor. The ginhouse is a large and fine one, with an excellent set of running gear in perfect order. Every other house on the place has been built since 1866. There are 19 cabins, with brick chimneys, built in different places on the plantation to suit the new system of labor. A three acre garden and orchard paled in, and a considerable amount of ditching done last year. The dwelling is a fine, large two-story house, with six rooms, exclusive of the kitchen, store rooms, bath rooms, etc., just completed at a cost of $6000. This is one of the best improved places in this country. I have spent $10,000, improyements [sic] alone, since 1866...”

Included in the notice were testimonies of John’s honesty and integrity from his neighbors, the Bossier Parish Clerk of Court, and the Recorder. He listed the names of individuals that would assume responsibility for all funds received through the lottery to guarantee that if all 300 tickets are not sold, the money will be refunded to those that did by a ticket. Other individuals agreed to act as
commissioners to superintend the drawing of the tickets and prizes to ensure the public that it would be “honestly and impartially done.” B. M. Johnson banking house in Shreveport acted as treasurer of the lottery funds holding them in an account to be redistributed in the event all tickets were not sold.

Each ticket was sold for $100 with the first prize, obviously being, the plantation of 700 acres. The second through the seventh prizes were 20 and 40-acre tracts of land, and there were 93 cash prizes of $100 each. The odds of winning the plantation or one of the other prizes was one out of three.

According to public records, the Palmetto Plantation remained in the Vance family until 1890; leaving us to assume that John Vance’s lottery scheme failed and that those that bought a ticket were refunded their money.