August: through the years 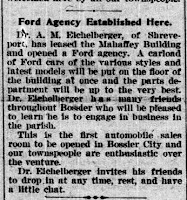 
Aug 7: It's back to school in Bossier Parish! Students, parents, and school faculty are gearing up for another exciting school year. Please, be mindful of all the buses that are loading and unloading the most precious cargo from our parish. 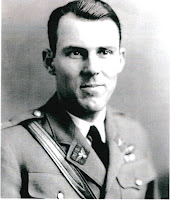 Lt. Barksdale was born in Goshen Springs, Mississippi. He attended classes at Mississippi State College for three years. At the start of World War I, he entered the officers’ training camp at Fort Logan H. Roots in Little Rock, Arkansas. He also volunteered for the aviation section of the U.S. Army Signal Corps as a Private First Class. After completing aviation ground school in Texas, Barksdale boarded to England in 1917. From there, he received his flight training with the Royal Flying Corps and was assigned to the 41st Squadron in 1918. The next year he became a founding member of the U.S. Army’s 25th Aero Squadron.
While Barksdale was assigned to Mitchell Field in New York, he met and married Ms. Lura Lee Dunn in 1921. In 1924, Barksdale had his first accomplishment while at McCook Field; he had a record of flying from Dayton, Ohio to New York in just under 4 hours (3 hours and 53 minutes). This was the first successful test flight using only instruments, he was later congratulated by his commanding officer Maj. W.N. Hensley. Over the next couple of years, Barksdale embarked on several flights and survived many aircraft accidents.
August 11, 1926, Lt. Eugene Barksdale flew his last flight. While testing a Douglas O-2 airplane over McCook Field in Dayton, Ohio, he could not recover from a flat spin. His parachute was caught in the wing's brace wires, causing him to fall to his death.
In the late 1920’s, a new military flying field was needed. After narrowing the location to a select few areas, the cotton fields in Bossier City, LA met all the requirements. In keeping with the war Department’s policy for naming the base in honor of Army Air Corps veterans that died in the line of duty, it was decided to name the field after First Lt. Eugene H. Barksdale. In a letter sent from the Assistant Secretary of War, Davison writes that Barksdale was, “an officer with an outstanding record who met his death in the line of duty while conducting experiments to determine the cause of the spinning characteristics of the O-2 airplane. As he was a native of Mississippi, he was in reality a neighbor of yours.” Barksdale Field was officially dedicated on Feb 2, 1933, and at that time this base was considered “the finest in U.S. history”.
*biography sources and pictures are courtesy of: Eight Air Force Museum/Barksdale Air Force Base, Book: Barksdale: The Man, The Base, Wikipedia, and www.findagrave.com