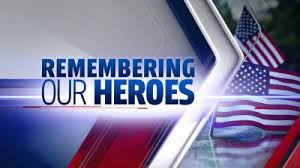 America, the great nation where within our borders live many different ethnic groups. Our nation permits individuals of all ethnicities the right to pursue the American dream: life, liberty and the pursuit of happiness. These rights are often taken for granted, but if not for price that was paid by many men and women who fought to protect or inalienable rights we as a nation would not be a strong as we are today. Standing united our nation gives thanks for those men and women who fought so selfishly to ensure our citizens free rights. Today we stand together to give Thanks to our Veterans for their unwavering courage and honor for our great nation.

President Woodrow Wilson proclaimed November 11, 1919 as the first commemoration of Armistice Day. Speaking the following words he honored the men and women who fight and fought for our freedoms: To us in America the refection’s of Armistice Day will be filled with solemn pride in the heroism of those who died in the country’s service and with gratitude for the Victory, both because of the thing which it had freed us and because of the opportunity it had given American to show her sympathy with peace and justice in the councils of the nations…”

In 1954, President Dwight D. Eisenhower officially changed the name Armistice Day to Veterans Day. The Uniform Holiday Bill of 1971 passed by Congress moved the celebration of Veterans Day to the fourth Monday in October, but do to the historical significance of Veterans Day President Gerald Ford returned Veterans Day to November 11, in 1975. It is on this date every year that America offers it Respect and Gratitude to those how have served our country,both past and present.

With World War II in full force it was essential that men and women of the United States take a stand to protect our great nation. One individual answering the call was Charlie W. Dieball. Volunteering for service Charlie Dieball enlisted in the United States Marine Corps on January 5, 1940. After completing basic training Pvt. Dieball was issued orders to participate in action against the enemy within the Asian-Pacific Theater. In July 1940, Pvt. Dieball began engaging the enemy in action. For over the coming year Pvt. Dieball continued in battle showing great courage, honor and faithfulness to the United States. In December of 1941 Pvt. Dieball participated in the Bataan, P.I., a battle that led to great loss for all who participated. May 6, 1942, Pvt. Dieball became a Prisoner of War. Arriving at the Hoten/Mukden Prisoner Of War Camp November 11, 1942, Pvt. Dieball remained imprisoned until August 20, 1945.

On August 16th, 1945 the Hoten/Mukden POW Camp was liberated by an American six-man American OSS (Office of Strategic Services) team that parachuted into Mukden to liberate the camp. Soviet troops entered Mukden a few days later and helped the evacuation of POW's.

At the time of his release Pvt. Dieball had in his possession two small note pads, and a pencil worn to the numb, one he had used to log the daily life in camp. His entries depict life inside the camp and the atrocities the men were forced to endure. With the second notepad Pvt. Dieball recorded the names and addresses of the men he came into contact with. On some occasions there are recorded entries of death dates of fellow prisoners. These entries bring to life the conditions of which these brave men endured and their will to live. Pvt. Dieball’s detailed history of the work, clothing, and lack of food provided are a vivid reminder of the price men payed for freedom.

Prior to his discharge Pvt. Dieball was promoted to the rank of Corporal and honorably discharged from the United States Marine Corps on the 15th January, 1946. The atrocities that Cpl. Dieball and thousand’s other endured in our fight for freedom bare reason that our great nation proudly celebrate Veterans Day.

The United States has stood proudly against its’ enemies with each passing century. New battles have risen but our nation’s brave military men and women continue to answer the call. The unwavering love of country, honor, selfishness, and commitment these individuals demonstrate stands tall in our nation today. America is secure in knowing that “we are secure” for our men and women in the military continue to stand for our freedoms. It is for these reasons that honoring our Veterans past and present is an honor and a privilege. Please join the Bossier Parish Libraries History Center in saying THANK YOU to our military personnel for continuing to stand between the United States and those who oppose us.

By: Ann Toellner
Posted by Amy Robertson at 7:31 PM