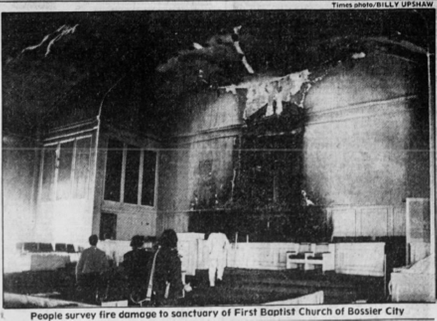 A little over a year ago, First Bossier Church on Airline Drive suffered significant damages due to fire, which they have recently begun the process of rebuilding. In the very long history of this church, which started in 1903, this is not the first fire that it has experienced.

On Feb. 22, 1984, a flame coming out of a roof louver was spotted by a Bossier City police officer around 11 pm. Thanks to a quick response, firefighters extinguished the fire in 45 minutes. The following article, written by Keenan Gingles that appeared in The Shreveport Times on Friday, Feb. 24, 1984, gives details of the event.

“Damages in a fire that destroyed part of First Baptist Church of Bossier City’s sanctuary will total more than $1 million, a church official said Thursday.

“Jim Barnwell, minister of media for the 5,000-member church, said a survey pf the damage by insurance company representatives and firefighters yesterday showed extensive damage in an area behind the choir loft. Barnwell said it could take three to four months to repair the damage.

“Firefighters battles the blaze for about 45 minutes after a Bossier City policeman apparently spotted flames coming out of a roof louver about 11 p.m., Fire Chief J.T. Wallace said.

“Fire Prevention Bureau personnel and insurance inspectors were still sifting through charred areas yesterday to determine the cause, but firefighters said they are pretty sure the blaze started from an electrical malfunction in a heating system for the church baptistry.

“Revival services had been held on Wednesday night and nothing seemed abnormal, Barnwell said. Fourteen persons were baptized and the building superintendent left the building bout 10 p.m., about an hour before the alarm was turned in.

“The fire apparently smoldered for a time, then erupted into flames, climbing up the three-story high  walls and ceiling, melting the baptistry and burning a large, jagged hole in the roof, Wallace said.

“Fire walls built into the 18-year-old structure kept the fire from spreading to adjacent wings and buildings, firefighters said.

“Firefighters managed to rescue about $80,000 worth of television cameras and equipment, but a grand piano and an organ were total losses. Barnwell said the heat warped and ruined the musical instruments.

“Firefighters said it took little water to tap out the blaze, but some water damage occurred and there was also smoke damage from the heavy gray-black smoke that filled the sanctuary.

“Self-contained breathing equipment was used by firefighters who entered the building and used small hose lines to extinguish the fire.

“Barnwell said the church will be using the Airline High School and other church buildings for worship services.”