Raceway on the Hill

In the spring of 1960, Louisiana Hilltop Raceway was “Built under inspired leadership of Louisiana businessmen who are fond of automobile racing.” The raceway was located in Bossier Parish, 12 miles east of Bossier City on Highway 80. The raceway sat on 158 acres of land in Haughton on the site formerly known as Gidden’s Hill, where the famous Gidden’s castle once stood.

According to an article in The Shreveport Journal on Jun. 4, 1960, the “Principle developer of the raceway has been Stephen Robinson, a well-known Bossier City contractor and a longtime competitor in Sports Car Club of America races. Robinson’s cohorts among officers of Hilltop are Clarence L. Madden Jr., president; Harry B. Walker, vice president; J. Patrick Kelly, secretary, and J. Nixon Birdwell, treasurer. The board of directors consists of the officers and Major William Hughes, James L. Beck, Harry Balcom, J. Y. Littleton and G. M. Bodenheimer.”

Louisiana Hilltop Raceway was more than just a racetrack; it had something to offer the whole family. On Apr. 16, 1960, Clyde Durham wrote an article in The Town Talk, Alexandria, La, which gave great details of what the new raceway would offer. Durham informs the reader that the raceway was “Fully deserving the title of the deep South’s first true road course, the raceway features 14 turns, two of them banked, and a 3,200-foot straight. Incidentally, the course is cut into a hill which happens to be the highest point in Louisiana. From this hill, spectators will be able to see almost the entire course, a far cry from most circuits in the area.

“Other unique features of the Raceway will be picnic areas, a lake for swimming, a kiddie playground and a pedestrian bridge over the main straight.” Durham also informs the reader that the raceway was being built under the guidance of Steve Robinson, who was a “well-known Bossier City Alfa-Romeo driver.” 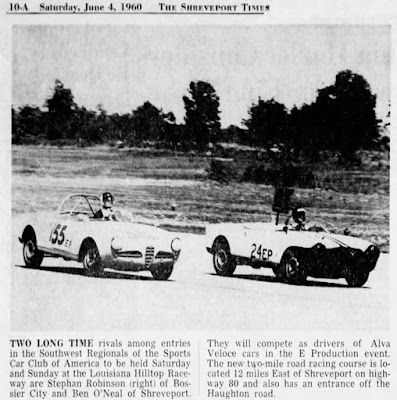 The inaugural sports car opener was Jun. 4-5, 1960, when it hosted the Southwest Regionals for the Sports Car Club of America. Prior to the opener, while the asphalt racing surface was being completed, the raceway held motorcycle scrambles. In a Shreveport Journal article Apr. 9, 1960, describes the raceway as having a “rugged one-mile obstacle course that is equipped with hills, water holes, and jumps.”

Perhaps the first memorable event at the raceway was held one week before Easter Sunday, on Apr. 10, 1960, when the American Motorcycle Assn. motorcycle and scooter riders competed in scrambles. “An extra added feature of the activity will be a motorcycle-scooter Easter egg hunt which offers trophies and prizes of merchandise. Track officials have announced the egg hunt is open to the general public with rules that prescribe that all eggs must be found while riding a motorcycle or a scooter.”

In a report published in The Shreveport Journal on Apr. 11, 1960, we learn that “the event attracted better than 2,000 spectators and included numerous spills with all of the riders escaping without injury.” Including the Lake Charles rider, Bill Woods, “who was thrown 50 feet after losing control of his cycle on the main straightaway.”

After the asphalt racing surface was completed, the raceway was open to professional drivers for practice before the grand opening, and the Dixie Sports Car Club offered a driver’s school for aspiring drivers. It also became a place for Go-Kart races, as the Ark-La-Tex Go-Kart Assn. opened there 1960 championship season at Louisiana Hilltop Raceway on its “special 1/8ths a mile go-kart track, 1,800 feet long with 11 right and left turns.”

From 1960-1962 Louisiana Hilltop Raceway had great success, but by1963 stopped happening. On Apr. 10, 1964, The Shreveport Journal announced the re-opening of the raceway. Then, in 1965, it was published that “the American Baptist Association has purchased Hilltop Raceways to be converted into a Christian recreation area.” The name for the 158-acre hilltop development was to be called Missionary Baptist Hill.