Sam Willer’s naturalization documents reveal that he immigrated to the United States in 1885 from Russia-Poland. According to an interview with two of his grandchildren, Willer left his home country because he did not want to serve in the Russian Army. He left his wife and four children and set sail for America, where he would establish a new home for his family. With his uncle, B. Willer, living in Shreveport, it was logical for him to come here.
When Willer first arrived, he started out peddling goods, buying merchandise in Shreveport, and traveling into the rural areas of Caddo and Bossier selling his wares. After four years of living on separate continents, Willer was finally able to bring his family to live in their new home in Benton. He purchased land in Benton, built a home, and farmed the land, growing cotton, and raising cattle. And he also built and ran a general merchandise store, S. Willer & Son.
In Bossier, Willer is most famous for chartering a steamboat to fetch supplies for those stranded in Benton during the 1892 flooding of the Red River. But, he is also known in the Jewish community as having an instrumental role in the organization of the Agudath Achim Synagogue in Shreveport, which is still serving the local Jewish community today. While Bossier Parish had their fair share of Jewish residents, the overwhelming majority lived in Shreveport, which is why this part of Sam Willer’s story is on the other side of the river.
It all began when he joined a small group, comprised of five practicing Orthodox families in Shreveport, called Beth El. The significance of his joining the group is that he made it possible for them to form a minyan. A minyan is a quorum of ten men (or in some synagogues, men and women) over the age of 13 required for traditional Jewish public worship.
At the same time, there was another small Orthodox congregation in Shreveport by the name of Beth Joseph. These two groups realized that there is strength in numbers, and they joined together to form Agudath Achim in 1902. According to the Encyclopedia of Southern Jewish Communities, “In 1904, the congregation began construction of a new synagogue, but work was soon halted due to one of the outbreaks of yellow fever that frequently plagued the city. The strain of the epidemic posed a serious challenge to the new congregation’s synagogue construction project. At the height of the epidemic, trains were forbidden to enter or leave the city, and health officials fumigated every home in the town. The small community lost members, and those remaining lacked the funds to continue the synagogue construction project.”
“In this period of great trial, the citizens of Shreveport exemplified the spirit of solidarity and friendship that often arises from adversity. When news spread of Agudath Achim’s setbacks, Jews and Christians from across the city stepped forward to provide the needed funds. On September 8, 1905, much of the town crowded into Agudath Achim’s ‘magnificent edifice’ to participate in the new synagogue’s consecration service. Speakers included Agudath Achim’s Rabbi H. Wolenski and Shreveport Mayor Andrew Querbes. The crowd also included city council members, members of the Reform B’nai Zion Congregation, the Catholic chief of the Shreveport Fire Department, and many prominent local figures.”
Their first building was located at the corner of Fannin and McNeill Streets. As the congregation grew, they built a new synagogue in 1938 at Line Avenue and Margaret Place, which is now Rutherford House. In 1980, they built their third and current synagogue, which is on Village Green Drive in South Shreveport. 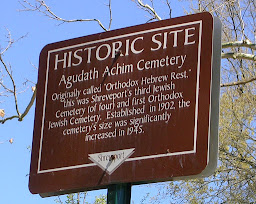 Before the formation of Agudath Achim, the members of Beth El pooled their monies together, and they purchased land for an orthodox Jewish cemetery located at Walnut and Yale Streets in the Allendale neighborhood of Shreveport. When the two groups formed Agudath Achim, the new combined congregation, which totaled 58 original members, assumed ownership of the Orthodox burial grounds, which became known as Agudath Achim Cemetery. Sam and Sarah Willer are buried there, along with other pioneering families of the area.
By: Amy Robertson
Posted by Amy Robertson at 7:30 AM