In 1940, Bossier Parish opened its first commercial airport and flying school. The Bossier Commercial Airport spanned eighty acres, located about three miles north of Bossier City, just west of the highway to Benton, and approximately one mile across Red River from the Shreveport Municipal Airport. 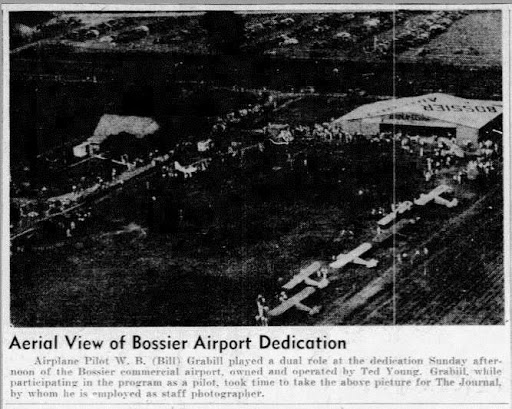 The dedication was on a warm Sunday afternoon in the summer of 1940. For the dedication services, it put on a big airshow, including a parachute jump with Minor “Mile High” Vinck, who carried a movie camera on his jump and filmed as he descended. Many public officials and prominent figures in the aviation world were in attendance, including Mayor Hoffman L. Fuller of Bossier City and Dwane Wallace, President of the Cessna Aircraft Corporation, and aeronautical engineer and designer.

Hosting the dedication were the owner and operator, Ted R. Young and his wife Annie, both licensed pilots. Ted received his pilot’s license in 1933, and he made the second airmail pick-up during the 1938 Air Mail Week observance in Shreveport. The first observance of National Air Mail Week was May 15-21, 1938. Postmaster General James A. Farley and President Franklin Roosevelt created and proclaimed the week-long event to commemorate the 20th anniversary of the US airmail service’s inauguration.

Annie received her pilot’s license in 1935 and is credited with being the first Shreveport woman ever to make a solo flight. She assisted her husband in operating the airport and in conducting the flight school. Annie was a member of the Ninety-Nines, an international organization of women pilots, founded on Nov. 2, 1929, in which Amelia Earhart was a charter member and elected the first President. 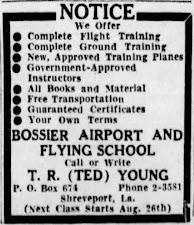 The flying school was fully accredited by the Civil Aeronautics Authority, offered ground courses, andprivate and commercial pilot flying courses, taught by government-approved teachers. The private pilot course was the same as those offered at colleges, but without the educational prerequisite courses. Many young men attended this course as army pilot prospects.

In 1941, the Bossier Commercial Airport started the year by staging an airshow on Jan. 11th and 12th. The airshow featured nationally known stunt pilots, parachuters, and included military aircraft. Also, a 1910 Curtis-Wright pusher plane, one of the first planes built by the Wright brothers, was flown by Clem Honkamp. Ted and his students planned an exhibition of flying as it was taught in class.

During the first day of the airshow, Ted decided to give an unscheduled exhibition of “how not to fly an airplane.” His demonstration ended in tragedy. According to the Shreveport Times, “Young apparently deliberately threw his plane, an Aeronca, into a spin from about 2,500 feet, spun the plane three times and crashed almost vertically into a field 50 yards from the north boundary of the airport.

“The cockpit of the plane was crumpled, the wings and back of the plane broken. Young was rushed to North Louisiana sanitarium in a Wellman ambulance and died at 7:50 p.m. He suffered a fractured skull, internal injuries, and both legs were broken. One leg was amputated in an effort to save his life.”

Just two months later, the airport and flying school were reopened as the Joy Airport, by Joy N. Houck, a well-known theater operator in the south.