The Honoree of Mayfield Street 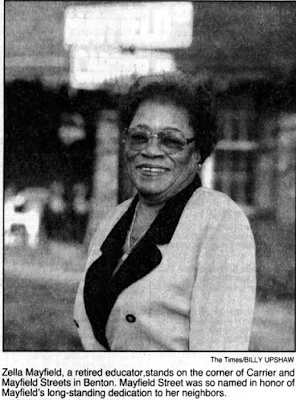 In 1916, Zella Mayfield was born Zella Ruby Cullen, the ninth child of William B. and Hannah Cullen. Her mother was known as “Momma Cullen” due to her popularity as a midwife in Benton, La. Raised by an Italian family, her father received a good education. He graduated in 1882 and then went to college, becoming an educator in Bossier Parish.

The Cullen’s saw to it that their children, all eleven of them, were educated. Mayfield attended school at Linwood, a Rosenwald school in Benton that had three rooms, one for grades 1-3, one for grades 4-7, and the third room served as a kitchen for preparing meals for the students. Starting in fourth grade, she attended the Bossier Training School, where she finished high school. Many children would stay in the dormitory during the school year, but she remembers walking three-miles to school instead.

Following in her father’s footsteps, Mayfield was an educator in Bossier Parish for 31-years. She started teaching before going to college, which was she said was allowed if a person completed 12th grade. Like most educators, Mayfield attended college during summer breaks. The colleges she attended include Northeastern, Louisiana State University, Wiley College, and Stephen F. Austin.

Her teaching career began at Oak Ridge, a small one-room schoolhouse. She also taught at Linwood, the Rosenwald school that she attended as a child. Eventually, she started teaching at Carrie Martin when it was only an elementary school—reassigned, later, when integrating public schools began in Bossier Parish, to Plantation Park Elementary School in Bossier City.

After her teaching career, Mayfield had plans to travel and see the world. As a Benton native and life-long resident, Zella Mayfield loved her community. Friends and neighbors urged her to seek public office, so she did, cutting short her plans to travel and see the world. In an interview, Mayfield said, “she couldn’t walk away from a public life – she was committed to helping her fellow man.”

Her political career began in 1986 when she became an alderman for District 2 of Benton. When she ran for re-election in 1992, she said that “she wants to see the town improve over the next four years, including improved care for the elderly and securing a new, enlarged town hall.” She held that seat for twelve years. During those twelve years, Mayor George Forrest resigned, and she served as pro-tem Mayor of Benton after his resignation and while waiting for Joe Stickell to take office.

Mayfield led efforts to improve the Bossier Parish Health Unit, for which she received honors in 1994. She was an active member of the Bossier Parish Concerned Citizens group, focused on improving education, voting rights, and community-related issues.

In 1997, former Mayor Stickell led the effort to name a town street in Benton in Mayfield’s honor. He asserted, “Zella Mayfield is a people person. She makes decisions to benefit the whole town of Benton. She’s a very influential person for blacks and whites here.” …

“Mayfield Street was so named in honor of Mayfield’s long-standing dedication to her neighbors.”

To learn more about Zella Mayfield and other women who made a difference in Bossier Parish, visit the Bossier Parish Libraries History Center, 2206 Beckett Street, Bossier City. While you are here, you can view an exhibit honoring some of these women.