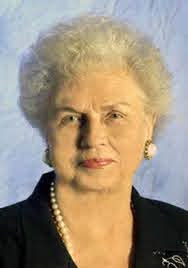 Sunshine Norris Dement was born to Steve Norris and Avis Wasson Norris in 1924 when Bossier City was still a village with a little over 1,000 people living in it. She attended Bossier Elementary and Bossier High Schools, graduating in 1942. Her senior year, she was crowned homecoming queen and watched the Bearkat football team win their first State Championship.

Sunshine went straight to college to earn a teaching degree. She first attended Louisiana Tech in Ruston for a year, but being away from home was hard, and she was in love with George Dement, so she convinced her father to let her attend Centenary College.

While earning her teaching degree, she worked as a student-teacher at Bossier High School. Her teaching career began at Parkview Junior High, teaching physical education, and it ended at Green Acres Middle School. She taught for about 20 years while raising five children and running businesses with her husband George.

The couple owned about eight restaurants before George accepted an offer to run the new Holiday Inn in Bossier, built when I-20 was constructed through Bossier City in the 1960s. After taking the offer, they sold their restaurants and focused on running the hotel, which they ran for 22-years.

Sunshine loved Bossier City, calling it “a little slice of Heaven.” She had a passion for people and loved, more than anything getting to know and working with others. She was always looking for ways to make a difference in the lives of her students, her neighbors, and everyone she met along her life’s journey.

When George decided that he wanted to run for Mayor of Bossier City, she told him, “If you do, I’ll divorce you,” because they were set to retire, and she was looking forward to retirement. But she loved George so much that she decided that if he wanted to run for Mayor, then she would support him and help in any way that she could. After he won the election, Sunshine stated that she “wants it to be the very best it can be,” speaking of Bossier City, and she recognized the people of Bossier City as its greatest asset.

The Dements thought Bossier City needed “curb appeal,” and Sunshine played an essential role in the beautification of Bossier City. She also took a particular interest in the city’s parks and served as the first Director of Parks for Bossier City. Sixteen years later, when they finally got to retire, she had no regrets and was especially glad for the opportunity to connect with and serve the people of Bossier City in a way that was only possible as the First Lady.

Sunshine also served as chairman of the Bossier chapter of the annual Heart Fund and March of Dimes. She was chairman of the Miles for Meals walk-a-thon fundraiser, which raised funds to feed homebound Bossier senior citizens for a year. She was a director of the local Altrusa Club; a non-profit organization focused on community service.