Bossier Girls and Women in Sports 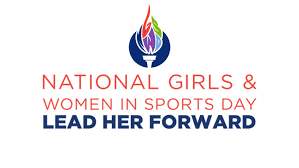 Today marks the 35th Annual National Girls and Women in Sports Day, which was first declared by President Ronald Reagan on Feb. 4, 1987, to recognize the history of women's athletics. It also recognizes the progress made by the Title IX Educational Amendment passed in 1972, which prohibits sex-based discrimination in any school or other education program that receives federal funding.

This annual day of observance acknowledges female athletes' accomplishments and honors the progress and continuing struggle for equality for women in sports. Every year the celebration inspires girls and women across the nation to play and be active and realize their full power.

Bossier Parish has seen its fair share of outstanding female athletes. Most recently is Sarah Robertson, who made history by becoming the first female football player at Haughton High School in 2018. She was the Junior Varsity football kicker for the Buccaneers and kicked her first game field goal on Sep. 17th scoring the extra point for the Buccaneers after their touchdown against Byrd High.

Another Haughton High School alumnus known for her skills on the basketball court is Crystal Smith. For four straight years, she was chosen for the Shreveport-Bossier All-City teams. In 2002 she was selected as the Scholar Athlete of the Year. She played 119 games during her high school basketball career, scoring an average of 26.2 points per game.

She played for the Iowa Hawkeyes in college, increasing her per-game average by 12 points between her sophomore and junior seasons, ranked as the second-best improvement among the nation's collegiate players. As a junior, she scored in double figures in 30 of 33 games and was named to the Women's National Invitation Tournament all-tournament team. As a senior, she was named the Hawkeyes' most valuable player and a consensus All-Big 10 selection after leading in her team with an average of 17.2 points per game. Scoring double figures in 27 of 29 games in her last season, she ended her career No. 14 on the school's career scoring list.

Scoring was not Smith’s only strength; she was recognized for her defensive play as well. She was a consensus selection to the league's all-defense team and was the only Iowa player to earn the team's defensive award for three straight seasons. While attending the University of Iowa, she held or shared six school records, including most points in a single game earning 46 points against Louisiana Tech. In 2006, after college, she was drafted to play for the Women's National Basketball Association team, the Phoenix Mercury. That year her team became the highest-scoring WNBA team ever.

Jackie Conner of Bossier City became a national Gold Medal winner at the age of 65 in the 1999 Northwest Louisiana Senior Olympic Games, playing shuffleboard and again in 2001. Since joining the Senior Olympics movement, she has been named Northwest Louisiana's Athlete of the Year and served on the local games' steering committee and the board of directors for the Louisiana Senior Olympic Games. For her contributions to the Senior Olympics movement, she was awarded the Hazel Gay Memorial Torch Award in 2002. She is also quite the marksman and served as chairperson of the shooting competition for the district games.

When it comes to the Olympic games, we must not forget about Dolores "Dee" Beckmann. A member of the first U.S. women's track and field team to participate in the Olympics—chosen as the all-around sportswoman in 1936 by New York sports columnist for being the first female coach of the United States track and field team in Berlin. After her girls won both the 100-meter, breaking the world record, and the 400-meter relays, she was hailed by sports columnist as one of the best coaches, male or female.

In 1940, she was the U.S. chairman of the 1940 Olympic women's track and field committee and was involved in the Olympics in some form or fashion for the rest of her life. Her contributions to girls and women in sports and her accomplishments are too numerous to include in this writing. Though Beckmann was not a native of Bossier City, she was from St. Louis, Missouri, but she did move here in 1973 to be close to family and lived here until 1978. During that time, she was inducted into the National Track and Field Hall of Fame in 1976. In 1978 she was inducted into the Missouri Hall of Fame and the Missouri Track and Cross-Country Coaches Association Hall of Fame.