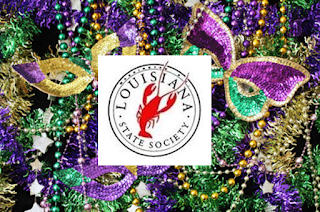 Felix “Dan” Broussard, an insurance salesman from Lafayette, La, attended the first Louisiana State Society Mardi Gras ball in Washington D.C. in 1944. He believed that the ball was “a great chance to bring the culture of Louisiana to Washington.” This statement led to him being placed in charge of the future balls, which he remained involved in for the next thirty years.

The following appeared in the Bossier Banner-Progress on Mar. 18, 1954, and gives an account of Burford’s Mardi Gras experience in Washington D.C.

“Congressman Overton Brooks, who extended so many courtesies to Miss Julia Ann Burford, the Plain Dealing Dogwood queen on her recent visit to the Mardi Gras festival at Washington recently, sent the following letter to the editors of the Banner-Progress:

‘“I am writing to inform you of the splendid manner in which Miss Julia Ann Burford represented the Dogwood festival at the Louisiana Mardi Gras here in Washington, and at other functions in which she participated while here. She has created an immeasurable amount of good will for the festival and for Plain Dealing.

“Soon after her arrival here Mrs. Brooks and I accompanied her to a special luncheon in the Capitol building, honoring her and other queens following a brief visit in the gallery of the House of Representatives. We enjoyed talking with her about our friends in Plain Dealing and were honored to present her to others at the luncheon as our own queen. Shortly after the luncheon Mrs. Brooks and my secretary rushed her away to one of Washington’s most popular television programs where she performed a dance, and told the listening and viewing audience about the Dogwood festival and Plain Dealing. Many people here saw this program and have commented very favorably about her performance and her discussion of the festival.

“The following morning I took her to the White House where she presented the picture painted for Mrs. Eisenhower by Mrs. W. H. Martin of Plain Dealing. As you know Mrs. Eisenhower has been ill since returning from California, and Mr. Homer Greunther, assistant to the president, and Mrs. Mary Jane McCaffree, secretary to Mrs. Eisenhower, met us. We then showed Miss Burford portions of the White House and its grounds which are not open to visitors under ordinary circumstance.

“We were especially proud of her at the Mardi Gras Ball, held in the Grand Ballroom of the Mayflower hotel. There she was escorted to the place in the “Royal Court” reserved for her and received the ovation of more than a thousand persons gathered there. She carried a sceptor [sic] and wore her crown as befits a queen. This was a great and well-deserved tribute to the Dogwood Trail and its queen.

“I want you to know that it has been a real pleasure to work with the patrons and sponsors of the Dogwood festival in making her visit to Washington a full and enriching experience, and this bring additional honor and notice to our area.

The painting that Burford gave to First Lady Mamie Eisenhower was the art of Oena Martin. She was a local artist from Plain Dealing, well known for her Plain Dealing area paintings. “The dogwood trail was one of her favorite haunts where she often went to put on canvas the beauty she loved so much.” A couple of years after her death, the companion piece the painting given to Eisenhower was displayed in a local art exhibit at the Plain Dealing library.