Fragrance Garden for the Blind

In 1972, Marie Croft Wissman and her husband Lt. Col. William Oscar Wissman returned to Bossier City upon his retirement from the U.S. Air Force, becoming permanent residents. When she passed away, her obituary gave a detailed account of all the volunteer work that she had performed while living here—leaving this writer to believe that perhaps she was the G.O.A.T. (greatest of all time) volunteer in our area. Mayor George Dement proclaimed April 16, 1991, as Marie Wissman Day for her extensive Community Service.

One of her passions was gardening, making her a perfect fit for the Barksdale Officers Wives Garden Club. But, one club was not enough for her. She was also a member of the Bossier City Garden Club, Louisiana Garden Club Federation, Shreveport Federated Garden Club Council, Deep South Region National Council of State Garden Clubs, and the Fourth District Louisiana Flower Show Judges Council. And she also served as Garden Chairman for the Shreveport Women's Department Club.

Garden clubs are a place to socialize and learn and where interested members can organize and participate in their community's beautification. One noteworthy project that Wissman spearheaded was the fragrance garden for the blind at the old R.S. Barnwell Garden & Art Center in Shreveport. According to Wissman, the idea of a garden, especially for the visually impaired community, was conceived by the Fourth District Garden Clubs. They researched other fragrance gardens, including the Helen Keller Garden in New York.

In their research, they learned a lot about plants that are receptive to touch and smell. They also enlisted Richard Wells, a Shreveport musician, and composer who is visually impaired, in designing the garden. When Wissman became the president of the Friends of the Barnwell, she revived the idea and served as project chairman of the fragrance garden, and they immediately began raising funds.

Initial funding of $6,500 came from the Friends of the Barnwell. They received a $10,000 grant from the Community Foundation of Shreveport-Bossier. The Fourth District Garden Clubs donated $2,500, with other significant donations coming from the Association for the Blind, Shreveport Beautification, and the Red River Revel. Many individuals also made donations.

The garden's dedication plaque reads, "Conceived by the Fourth District Garden Clubs as a sensory experience for the blind and all people who enjoy the smell, sound and touch of a garden, in such a special setting. 1988." This and other signs in the garden are in both English and braille. The planning and installation of the fragrance garden was a joint effort by the Friends of the Barnwell, Fourth District Garden Clubs, Louisiana Association for the Blind, and Shreveport Parks and Recreation. 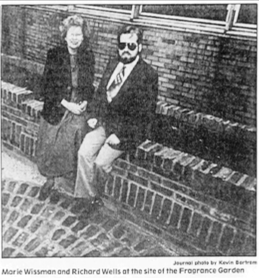 "The Garden was planted with assistance from Richard Wells of the Louisiana Association for the Blind. Gerald Chance, chief planner and landscape architect for SPAR, said this assistance from the blind resulted in the best location and best planning for the project. 'If we didn't have that, we probably would have had the wrong idea,' he said.

"The site (on the East side of the Barnwell) was picked for convenience and size. Handrails used as guides also define the area. 'We learned that a blind person prefers a tight space over an open area,' Chance said. 'It gives them a sense of security.' The small garden features brick paths and beds, and there is a fountain 'which is a reference point for the blind' he explained. 'They will be able to hear the fountain and thereby know where they are in the garden,' Chance said.

"The garden features different types of plant material, selected for their contributions to the senses. 'You could almost call this a sense garden,' he said, 'because a visitor will experience most of the senses sight, smell, touch and sound.'

"Chance said the garden was planned to fit into the overall concept of the Barnwell gardens. 'While each area is separate, we (SPAR) oversee the entire thing in order to get a continuity,' he said. 'Although we allow for diversity, we have control over what goes into the spaces.' The same bricks (they once paved Commerce Street) are being used throughout the gardens for paths and planters and some plants ('theme plants,' he calls them) are used throughout."

The Shreveport-Bossier Convention and Tourist Bureau awarded the Friends of the Barnwell fragrance garden a tourism award in 1990 for their expansion and development of a tourist attraction. The garden is still there, but sadly it lacks the love and attention it once received during its first two decades.