Photos from the Scanland collection

The History Center has a wonderful collection of early 1900s photographs taken by Mabel Abney Scanland Jones. Mabel is the daughter of William Henry Scanland, Sr., the editor of the Bossier Banner newspaper. She used her Kodak Brownie camera to snap photos of her family and friends around Benton and Bellevue. Frequently, when people think of older photos, they expect to see the subjects with serious faces and stiff poses. This is not the case with Mabel's photos; rather, she captures candid images of laughing couples, her joking brothers, children playing with pets, and scenes of everyday life in Bossier. 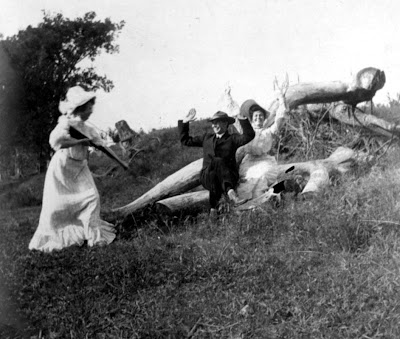 In the above photo (0000.004.150) we see one of the Ogden sisters staging a hold-up of Mabel's older brother, William Henry Scanland, Jr., and another Ogden girl. 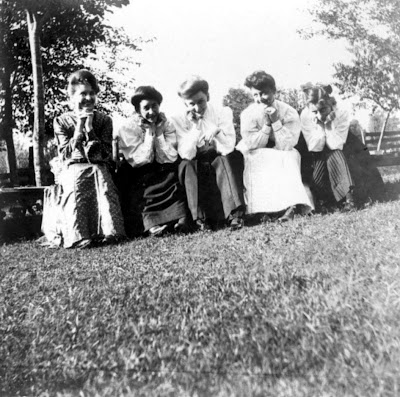 Above (0000.004.042), Mabel and her friends, Bess Wheless, Susan "Pearl" Dortch Colbert, and Octavia Hunter all pose with their hands on their chins. One girl is unidentified. 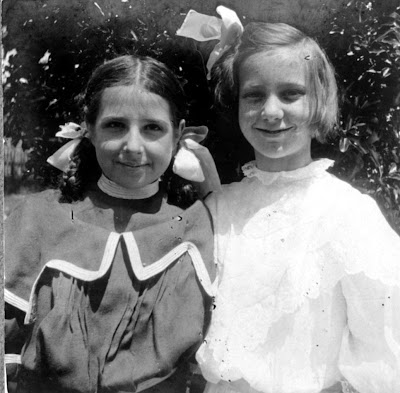 Mabel's oldest brother, Dr. John Milton Scanland, moved to Montana and became a physician and superintendant for the Montana State Hospital. The family traveled by train to see him and Mabel brought her camera along for the trip. She took pictures of several depots along the way and some snowy scenes - perhaps it was her first time seeing snow! John Milton married a doctor's daughter and was a frequent traveler, making transatlantic crossings aboard the Mauretania (sister ship to the Lusitania) and the Olympic (sister ship to the Titanic).

After researching census records, it seems like Mattie Belle stayed in Montana with her brother for a time around 1920. She met her husband, Ewing Montgomery, in Montana and the couple had moved to Los Angeles by 1930.

Posted by Marisa Diedrich Richardson, Curator of Collections at 1:30 PM