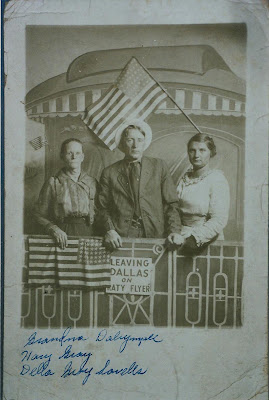 Photo of “Grandma Dalrymple” with Harry Gray and Della Gray Cavells. Grandma Dalrymple went to France as a Gold Star Mother to visit the grave of her son, Henry H., who perished in World War I. Gold Star Mothers are mothers whose sons or daughters died in the line of duty in the Armed Forces of the United States or its Allies, starting with World War I. A gold star replaced the blue star families displayed to show they had a soldier overseas. In the late 1920’s, the War Department of the United States compiled a list of mothers and widows of WWI soldiers killed and buried in Europe and offered to take them to their loved ones’ graves. Between 1930 and 1933, 6,000 women traveled on these “Gold Star Mother Pilgrimages”. A rare act of public support for private grief, they were entirely paid for and planned by the U.S. Army.