In April of 2006, a wheelchair more than a century old was donated to the Historical Center. In keeping with our mission of collecting Bossier Parish historical material, staff learned that the wheelchair had been used by several members of the Kirklin Family of Bossier Parish. The donor included a note saying, “The wheelchair was for James Albert Kirklin (b. 18 Oct 1903 d. 2 Nov 1915). I don’t know if anyone used it before him or not. He suffered from a high fever (age 3 or 6) and [was] thought to have inflammatory rheumatism — maybe polio? Never walked again. In 1936 James Robert Kirklin - father of James Albert was feeding the stallion he had and the stallion kicked him and broke his leg. He used the wheelchair until he died of thrombosis — a clot went from his leg to his heart."

The wheelchair had been stored in the attic of a house that was being used by hunters. When the hunters discovered it, they pulled it from the attic onto the second floor of the house where it remained until April of 2006 when the donor learned of its whereabouts and brought it to the Historical Center. The wheelchair was in bad condition, with the cane backing and seating badly cracked, the third wheel (a small wheel behind the chair) broken and with numerous other preservation issues. The donor and two other family members paid for the wheelchair's restoration, which was completed by a local company.

To see the wheelchair in its newly restored state, visit the Bossier Parish Library Historical Center. 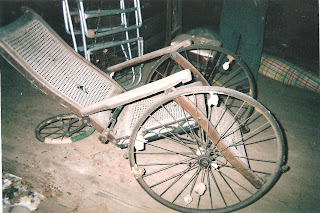 The wheelchair as it appeared in 2006, having been stored in an attic for decades. 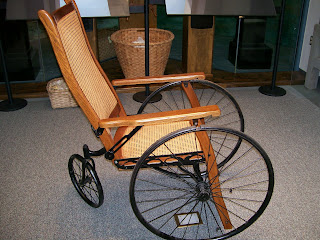 The wheelchair as it appears now, after restoration.
Posted by Marisa Diedrich Richardson, Curator of Collections at 9:11 AM