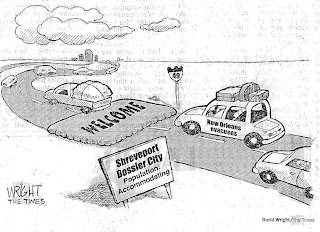 Cartoon by David Wright, courtesy of The Shreveport Times

It’s been five years, on August 29, since our neighbors on the Gulf Coast had to face the devastation of Hurricane Katrina (and soon after that, Hurricane Rita). Their lives were transformed and for a while, life here at the Bossier Parish Library was transformed, too. It never occurred to us the critical role a public library might play in disaster response, several hours away from the disaster, but we learned on our feet. Hundreds of evacuees poured into the Bossier Parish Library so they could use the computers to look at satellite photos of their homes, to try to contact friends and relatives whose whereabouts were unknown, to watch a New Orleans news channel via the Internet (we projected the streaming video onto a screen in the Historical Center meeting room) and to fill out their FEMA (Federal Emergency Management Agency) applications. They also were here as a place to spend time outside of a crowded shelter or relative’s house and as a place to let their kids be kids in our cheerful Children’s Department. Our librarians did what librarians do – they provided lots of information, from local bus schedules to how to get food assistance - but they expanded their role well beyond that. They provided sympathetic ears and hugs and friendship, while hosting or trying to keep tabs on their own family members in affected areas.

Historical Center staff noticed that history was in the making under our very own noses, so we did a small oral history project, interviewing evacuees who visited the library and staff members who were on the front lines helping patrons and dealing with their own families’ situations. History and Outreach Specialist Pam Carlisle recently burned a CD of the transcripts of these interviews and sent them to the Louisiana State Museum in New Orleans at the request of Greg Lambousie, Director of Collections. He will be adding them to the State Museum’s archive, where they can be accessed by researchers and they may be useful for exhibits. We are honored our stories will be preserved by the people so directly affected by the tragedy of five years ago.

“I learned a lot about myself during that period of time, how important it is to think that you are connected to about just anybody that walks in that door in some way. And, don’t let them ever go away empty handed…If you can’t give them what they need, send them some place where they can find it.”
-Reference Librarian Martha Matlock (now retired), Bossier Parish Library
Posted by Pam Carter Carlisle at 12:15 PM