A Spoonful of Snake-Oil

Our new exhibit about the patent medicine industry is available for viewing in two of the Historical Center's display cases. Stop in to learn about the questionable ingredients and advertising tricks used by patent medicine manufacturers. All of the advertisements on display were taken from the Bossier Banner newspaper. Also on display are antique medicine bottles.

There were numerous ads for medicines in the newspaper, so we weren't able to include them all in the exhibit. Below are two ads for Pe-ru-na from 1900. Pe-ru-na was a very popular remedy, chiefly because of its high alcohol content. Why did so many medicines contain so much alcohol? Manufacturers said it was necessary to preserve herbs, but this wasn't the whole truth. Stores didn't need a liquor license to sell medication and any liquor taxes did not apply to the patent remedies. The alcohol found in patent medication provided the public with an economical way to drink.

Pe-ru-na's widespread usage was also thanks to its claims to cure catarrh - and any pain or discomfort could be pinned on catarrh by the Pe-ru-na salesmen. Catarrh was the cause of stomach troubles, runny noses, earaches, and fevers. No matter where the catarrh was in your body, Pe-ru-na could cure it, ads boasted. These two ads for Pe-ru-na used "celebrity endorsements." Whether these men and women actually gave permission for the companies to use their likeness or received any compensation is unlikely. 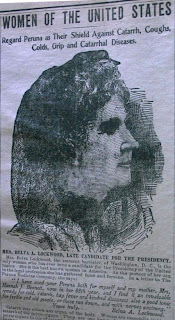 Belva Ann Lockwood was a noted attorney in Washington D.C., and was apparently the "best known woman in America" thanks to her run for president of the United States in 1884 and 1888. Here, Pe-ru-na uses her face to appeal to women across the country. In a letter supposedly from Lockwood, we learn that it is an "invaluable remedy for cold, catarrh, hay fever, and kindred diseases." 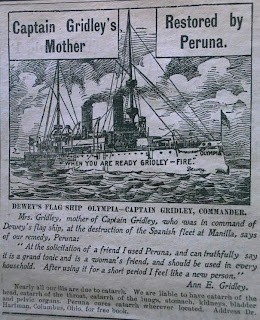 This ad doesn't show a famous face, but rather a famous ship from the Spanish-American War. Ann Gridley touts the wonders of catarrh-curing Pe-ru-na, calling it a "grand tonic and a woman's friend." Ann was the mother of Captain Charles Gridley, the commander of the USS Olympia during the American victory at the Battle of Manila Bay. Gridley received the well-known order, "You may fire when you are ready, Gridley," from Admiral George Dewey. This ad mentions Dewey three times, implying an endorsement from the heroic admiral himself.

Come to the Historical Center to see more ads in this exhibit or ask to look through our back issues of the Bossier Banner newspaper.
Posted by Marisa Diedrich Richardson, Curator of Collections at 1:56 PM