In his column for the April 22, 1954 issue of The Bossier Banner-Progress Ardis Manry wrote about 3 early burials in Bossier Parish. An earlier issue of the newspaper had stated that Elizabeth Felps’ grave may have been the oldest marked grave in northwest Bossier Parish. Comments from readers then began to dispute that statement. A Mrs. Hamiter pointed out that Patience Hodges Hamiter died June 1, 1848, and was buried in the family burial plot on what was then the John Hamiter plantation, but known in 1954 as the Hardy place. The 1848 death date was three years before Elizabeth Felps died. 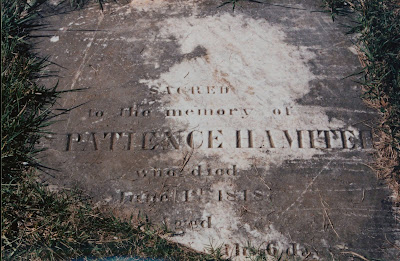 A student from Plain Dealing High School then brought in an affidavit to the effect that out in Ward 4 near his home there was a tombstone that bore the inscription: “Sacred to the memory of John B. Hutchinson, born 20th of February, 1763; died 1st September, 1816, aged 54 years, six months and 11 days.” According to this, Hutchinson died 32 years before Hamiter. However, Clif Cardin’s Bossier Parish Headstones records that the John B. Hutchinson headstone actually says that Hutchinson was born February 20th 1792 and that he died on September 1st, 1846. In his book, Mr. Cardin gives a very interesting description based on courthouse records of Hutchinson and his family and how the lone grave came to be located where it is. Grandparents of the Plain Dealing student recalled visiting an old home 200 feet from the Hutchinson grave and describing the house as “two stories in height, plaster finish inside, front porch on both first and second floors, and facing due south. It had a staircase arising from the center of the bottom story and winding up to the side of the second story. There was a 25 foot square dance hall. A copper pond or pool was on top of the house. Excess water drained off into a cement cistern on the ground.” A Rocky Mount resident remembered the house, long since torn down in 1954, as having been called the White house. As a child he had seen it hauled past his home in wagons. Manry also noted that another source reported that at one time a person had died in the home and that the body was kept upstairs for a long time before it was finally buried. No one that Manry contacted remembered anyone living in the house, which Manry speculated must have been one of the nicer homes in Bossier Parish in its time. According to Clif Cardin, Manry was able to contact a descendant of John Hutchinson who had their family Bible, stating that Hutchinson did, indeed, die in 1846, not 1816. In addition, Mr. Cardin tells us that William Joseph Hutchinson, the younger child of John B. Hutchinson, moved to Caddo Parish and established the Caspiana Plantation.
Posted by Marisa Diedrich Richardson, Curator of Collections at 2:34 PM