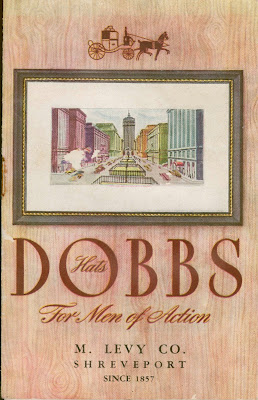 The November 11, 1948 issue of The Bossier Banner proclaimed the 91st birthday of M. Levy
Company with a brief history of the popular store.

“The store, begun in 1857 by Morris Levy, is now owned jointly by Marx Levy and Nathan
Bernstein. Slogan of the store is ‘Shreveport’s traditional headquarters for fine wearing apparel
since 1857.”

“Ninety-one years ago when the store was established, Shreveport was a thriving river town of
about 2,000 persons. Among the travelers, traders, and planters attracted to the bustling
settlement was Morris Levy, who came from Marshall, Texas, where he had been in the clothing
business.”

“Destined to be one of the leading figures in the building of the city, Levy immediately opened a
general merchandise store in the 200 block of Texas Street.”

“The store rapidly became one of the most popular gathering places in North Louisiana. When
planters, hunters and traders came in from their plantations flung along the rich banks of Red
River and when captains docked their boats here, they all met at Levy’s store.”

“During the lean years of the Civil War, Levy’s store remained open. But in 1865 when the
carpetbaggers invaded the South, Levy moved to New York to give his children the benefit of an
eastern education. In 1869 he returned to Shreveport and opened a new store in the 200 block of
Milam Street. Levy, who had given generously to the cause of the South during the war, devoted
his energy and resources to helping rebuild the land as well as his store.”

“When Levy died in 1898, his sons continued to operate the store.”

“In 1903 the store was moved to 303-305 Texas Street. There it remained until 1916 when it
was moved to its present location in the Levy building at Texas and Edwards streets.”

“In 1920 the Levy brothers retired and the store became the property of Marx Levy and Nathan
Bernstein.”

“Both Marx Levy and Nathan Bernstein have lived in Shreveport all their lives, and both began
their careers in the store while they were in their teens.”

“Since that time the business has grown rapidly. The present store has a floor space of 10,000
square feet. Forty-five employees are kept busy in the store serving the public.”

“From all section of the Ark-La-Tex persons come to the store of M. Levy to buy wearing
apparel for all members of the family. Many of them are from families that have traded there for
generations.”

“The 91st anniversary of the store is being observed by the executives of the company with pride
in the realization that the traditions and service of the founder of the store are being upheld
today.”

The final listing for M. Levy Company was in the 1978 Polk’s City Directory.

To learn more about the history of local businesses visit the Bossier Parish Library Historical
Center.