In honor of Black History Month and its 2018 theme, “African Americans in Times of War,” the Bossier Parish Library Historical Center presents a talk:  “Andre Cailloux—Free Person of Color, Civil War Captain” by Ann Middleton, Historical Center Director. Ms. Middleton’s talk on Andre Cailloux will be presented as a case study of a long-term genealogy project she began while a genealogy and special collections librarian at the Historic New Orleans Collection.


Andre Cailloux, the first black military hero of the Civil War was a French Creole free person of color in New Orleans and an officer in the first black regiment officially mustered into the US Army as well as the first black regiment involved in a significant battle. Cailloux’ brave death in this battle, the Battle of Port Hudson, inspired not only people of African descent in New Orleans where he received an unprecedented military funeral procession on July 29, 1863 (pictured in this woodcut that was published in Harper’s Bazaar) but among African Americans and their white radical allies nationally. As a “culture hero’, according to historian and author Stephen Ochs, Andre Cailloux’ story became elevated “to a near-mythic status.”  Ann Middleton will illustrate for patrons the genealogical research process that can bring his story back to the realm of an authentic human life.
Illustration: Funeral of the Late Captain Cailloux, First Louisiana Volunteers (Colored) from the August 29, 1863 edition of Harpers Weekly. 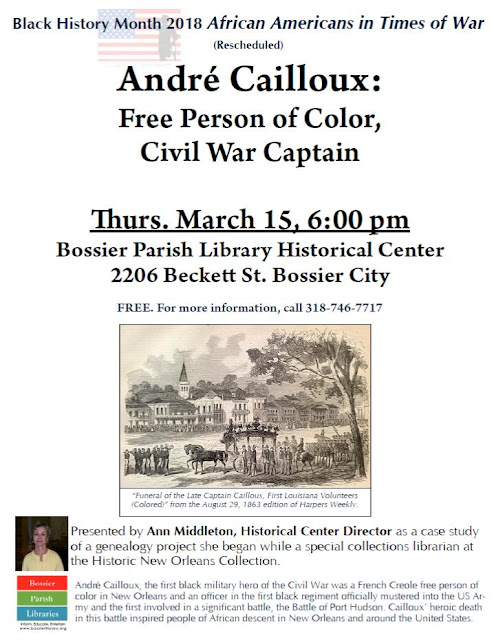 Posted by Amy Robertson at 5:00 PM