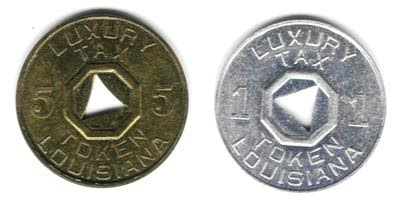 An editorial in the October 1, 1936 issue of the Bossier Banner expressed frustration with a new “luxury tax” in Louisiana.

“Merchants, consumers, and officials throughout Bossier Parish and the entire state have become more and more dubious and alarmed as today (Thursday) has approached, as they are fast coming to realize that the new so-called Luxury Tax is in reality no luxury tax at all, just a modified sales tax in a most unworkable and unenforceable form.”

“While we understand the necessity for raising state funds, presently facing Governor Leche and his administration, if they are to take care of the debts already piled upon our state and carry on a semblance of improvements and the social security program as well, we cannot see our way clear to champion any sales tax, whether it be denominated a luxury tax or nor.”

“We have always looked upon a sales tax with disfavor, for we know that the burden entailed falls on the shoulders of the man least able to pay—the poor people and the people of little means. After all, a sales tax is a levy on the consumers, even if it is disguised behind so high sounding a name as a luxury tax.”

“A Luxury Tax! Who ever heard of rolls, made from the same dough from which bread in loaves is made, being a luxury? Who ever heard of a 13-cent can of pork and beans being a luxury? While a 10-cent can is a necessity. Suppose a certain poor man has a very large family, will any kind of canned beans he can afford ever be a luxury? It will be unfortunate indeed for a man, simply because he has a large family, to be penalized when he goes to buy food for his brood.”

“Taxes on shoes, coats, suits and a hundred other items of clothing—luxuries indeed! Even the most humble farmer does not want to wear overalls and a jumper all the time. Yet, if he wants to buy a suit he must be sure to keep the cost below $3, else he will be purchasing a luxury.”

“These are but a few of the items, affected by the bill, which bear out our contention that it is in no sense of the word a luxury tax, but a sales tax that is limited in its application.”

“While some folks are saying that a general sales tax, because its collection will be much simpler and will entail less expense and worry to the retailer, is, in their judgement, more desirable than this limited sales levy or luxury tax, we cannot see eye to eye with them. A sales tax can never be a desirable tax. Of course, one may have to come, but unless conditions change, we’ll never support it.”

“As we see it, curtailment of state expenditures is in order, if sufficient funds are not available. If curtailment is impossible, then some other tax ought to be found. Don’t tax the people who can least afford to pay. A sales tax will do just that.”