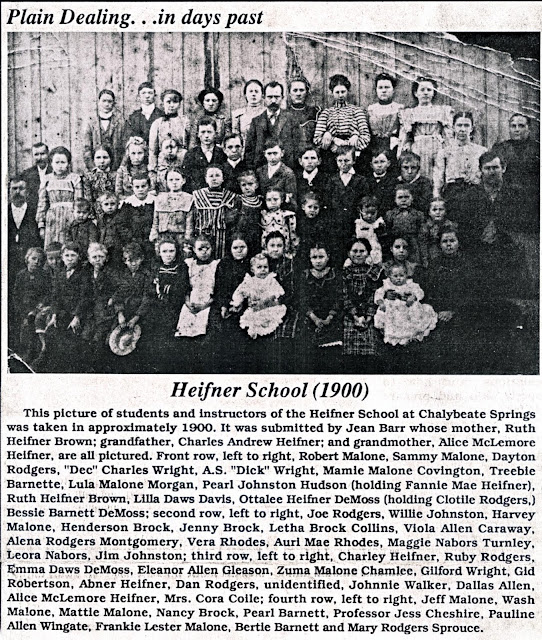 Written by Patsy Barnett for The Plain Dealing Progress, the following article appeared in the Progress’ July 7, 1949 issue.

“Just after the Civil War, a group of settlers came to the northwestern part of Bossier Parish. Among these were Wylie Barnett, Edmond Cochran, Coleman Kine, John Heifner, Mastin Brock and Grant Spruill.”

“This settlement was known as the Alabama Settlement for a while, but later became known as Chalybeate Springs. It was called this because the water there contains chalybeate, a Greek word meaning iron. The land there is flat but fertile, and the settlers grew cotton, cane and practically everything they ate.”

“They built the Baptist Church which is still being used. The first school had only one room and was called Heifner School in honor of John Heifner who owned the land where it stood. Some of the teachers who taught there were Eliza Bounds, Mrs. Willie DeMoss and Lillie Stampley. [When,] in 1824 [probably should be 1924] this school was torn down a two-room school was built. It was called Yellow School because of its color. The students would go to the tenth grade here and then go to Plain Dealing High School to graduate. Some of the teachers who taught here were Vera King, Mrs. Clifford Oglesby and Bertice Chamlee.”

“The only means of transportation these early settlers had was by wagons and buggies. Every fall these settlers went to Shreveport in wagons and spent the night. While they were down there they bought the things they needed.”

“Gideon Allen from Georgia was the first to settle Red Land in 1846. Some of the other early setters coming in 1852 from Tennessee were John Swindle, Martin Martin, Matilda Allen and Major Watch. This community got its name from the fact that the soil is a deep red.”

“The founder of the church was Moses McDonald. He settled the place where Ivor Barnett now lives. Salem Church was organized November 27, 1884. They had four members then. They were S. McDonald, his wife, Mahala, and Marguerite Covington. The early church list included people [from] east of the Mississippi River and south of the Ohio River except Florida. The Salem graveyard has existed since 1850.”

“Most people settled on a hill or built a house close to a spring so they wouldn’t have to dig wells.”

“People came in boats down the Ouachita River, the Red River and the Mississippi River.”