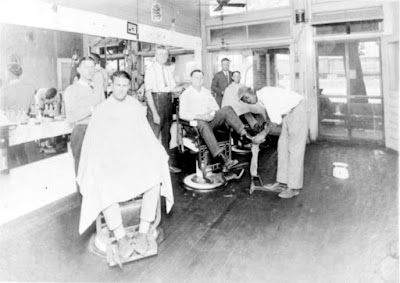 The March 6, 1930 issue of the Plain Dealing Progress proudly announced that several new businesses would be showing up in Plain Dealing.

“The past week has been a very active one in Plain Dealing business circles and rumors are current of many other possible entries into the local commercial field.”

“Two pressing shops, two barber shops and two restaurants are either already doing business or will be soon according to reliable information.”

“Mr. Tennis is arranging to open an up-to-date café in the front part of the Progress building, while in the same building, Milo Castle is establishing a modern tailor and pressing shop.”

“On Cotton Belt Street Earl Cornish has also put in a first class tailor and pressing shop in the Lyon’s building. On the same street we are reliably informed that a business man from Cotton Valley is going to put in a large rooming house and restaurant just above Walker Bros. Drug Store.”

“F. D. McKellar and father are utilizing the space between the McKellar and Turnley building for a small brick structure, and as we understand Mr. Whisenant of Ida, is likely to establish himself also in the tonsorial business there.”

“Mr. Stanley of Oil City has just put in a three chair barber shop in Walker Bros. Building, and both Wheeler and Johnson, long established shops, have added a chair each.”

“Every day is expected to usher in activities of the Standard Oil Co. on the Boggs property, recently purchased by that company.”

“In a conversation with Mayor McKellar, we were pleased to learn that he has in view the building of some neat cottages in West Plain Dealing.”

“This is a most progressive ad wise step on his part and we only hope it may be the beginning of a building program, so essential to Plain Dealing’s real growth and development.”

If any readers have pictures of these businesses, we would love to make a copy to include in our
database.

Don’t forget that the Read & React to History programs will begin July 3, 2018. The series will center on the book Lighting the Fires of Freedom--African American Women in the Civil Rights Movement by Janet Dewart Bell. Dr. Rose Harris, Ralph Bunche Endowed Professor of Political Science at Grambling will facilitate the series. The programs will take place at the Bossier Parish Libraries History Center on 4 Tuesday evenings in July from 6:00-7:30. They are free but you do need to call to pre-register—318-746-7717. A light supper will be provided.