Bossier Parish in the 1850s

Newspapers are an excellent source for local, national, and global news. Even as early as 1894, The Bossier Banner was printing articles that provided a glimpse into the past here in Bossier Parish. The following excerpts are from an article, “Bossier in the Fifties,” that appeared in The Bossier Banner on Dec. 13, 1894. 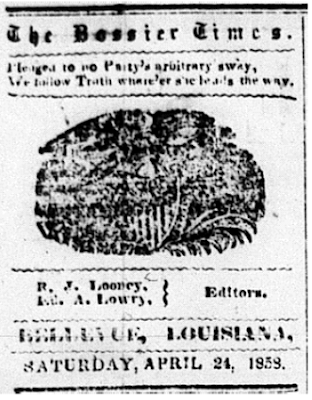 “The Bossier Times was the first newspaper published in this parish. It was printed in the Court House at Bellevue for several months; removed to an office south of Mrs. Lowry's residence, and finally to a building erected for the Times a few months before its suspension, and since 1859 known as the Banner office. W.C. Mitchell and Edward A. Lowry were the editors and proprietors of the Times, and the first issue appeared on Saturday, September 17, 1857. — On April 24, 1858, Mitchell sold his interest to Mr. Robert J. Looney, and the paper was issued by Looney & Lowry, until Aug. 6, 1858, when Mr. Looney disposed of his interest to Mr. Lowry. In the next month, Sept. 3, 1858,

Lowry sold the Times to his original partner, Mitchell, who continued the Times until June 17, 1859, when it was suspended. In a transfer sale, Messrs. A.A. Abney, T.M. & B.F. Fort became owners of the Times material.

“From the files of the Times of 1857-8 the following early history of the parish is gleaned:

“The first quarterly meeting for 1858 was held by Rev. S.S. Scott at Walker’s chapel in January.

“Cyrus W. Field sailed from New York for England on January 4, 1858, for the purpose of making arrangements for ‘laying the Atlantic telegraph in the spring.’

“May 28, 1858, Dr. Levi H. Fisher advertised that he had permanently located in Bellevue.

“Rev. Moses S. McDonald died June 5, 1858. He was an ordained Baptist minister, and moved from Mississippi to Louisiana in 1841. He was a member of Cypress Lodge, then located at Collinsburg, and the resolutions of respect published are signed by G.W. Sentell, Jas. T. Turnley and N.A. Cooper.

“At a Democratic convention held at Natchitoches on Sept. 13, 1858, T.T. Land was nominated for Associate Justice of the Supreme Court. The election was held October 4, and out of a voting population of 909 in Bossier, only 247 votes were polled. Land received 161 and John Ray, Know Nothing candidate, 86. Land received a majority in the District of 470.

“In December a market house was built in Bellevue.

To access the past through old newspapers, whether your researching local, national, or global history or family history, visit the Bossier Parish Libraries History Center at 2206 Beckett St., Bossier City.