Fifty years ago today, an article by Betty Paul Bigner, Woman’s Editor for The Shreveport Journal, covered the then-recent fashion show put on by the Barksdale Officers’ Wives’ Club. Who have been known for their fashion shows over the years, but in 1970, they decided to have some fun and put on a “Spoof Fashion Show.”

“The object of the Spoof Fashion Show is to design, sew and model a dress, suit or outfit of newly purchased material at a cost not to exceed $6” (equal to $40.90 today). Three categories, “Most Beautiful,” “Most Original,” and “Most Humorous,” were competed for by various groups. “Judges for the show included Imy Marcus of Marcus Furniture Co.; Pat Reglin of The Barn Dinner Playhouse and this writer.” With each presentation a commentary was given on the fashion design and was accompanied by background music. 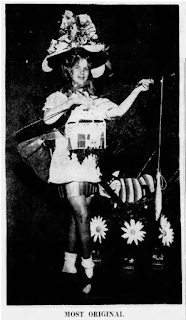 “IN THE ‘Most Original’ category, the Medical Group carried off the honors with their entry, “Miss Pollution - 1970.” Her ensemble featured a garbage can skirt, adorned at the back with a bow made of disposable garbage bags. Her bolero top was fashioned from dented hub caps fastened with banana peel chains and her hat - the top of the garbage can - was featooned [sic] with gum and cigaret wrappers and trimmed with dixie cup scallops. Providing just the proper touch was the dead mackrel [sic] she carried on her fishing pole. Mrs. Frank G. Rohrbough served as the commentator and Mrs. Dave Trent modeled the creation. 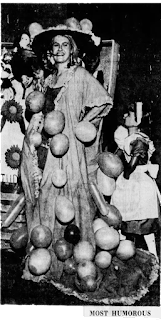 “The ‘Most Humorous’ costume was devised by the Second Bomb Wing, with Mrs. Marvin L. Chappell as commentor [sic] and Mrs. Michael J. Parr as model. ‘The Gal He Loves or Loved’ was presented. The model first appeared with her hair in curlers and wore a voluminous granny gown of flour sack squares, a garment which hardly hid the pounds that had gone here and there and here and there during the years. Shape up became her motto and via the popping of the balloons which contributed to her excess avoirdupois she emerged in a ruffle trimmed cloak and wide picture hat. Shaping up revealed her in a fringed two-piece mini. The inside of her cloak was lined with comely photographs of shapely dames so that she truly presented ‘The Gal or Gals He Loves.’

“A COSTUME suitable for Barksdale’s representative to Japan’s Expo ‘70 was judged the ‘Most Beautiful.’ The groups responsible for this lovely creation were Controller, IG, Surgeon and Judge Advocate. Mrs. C. J. Lewis provided the narration while Mrs. Lewis Long served as the model. Two shades of pink cotton were used for the Empire formal, which was designed with a Watteau train. Self fabric flowers adorned the train, front panel of the skirt and one shoulder strap. The same blossoms were used in the model’s hair. The center of the train was a deep rose cotton cut into a pagoda shape and sprinkled with rhinestones. 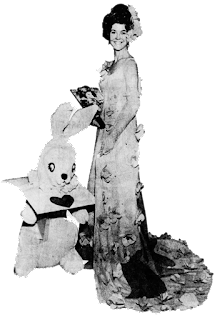 While visiting the library’s website, be sure to explore all of the great online databases. Such as creativebug, which has over 1000 online art and craft courses; kanopy, for thousands of films you can stream online; or maybe take a Gale Course and learn something new or improve a particular skill over a six-week course, all are free with your library card. If you do not have a library card, you can still get one while we are closed by going to our website and selecting “get an e-card” at the top of the page inside the red “Public Health Alert” box.