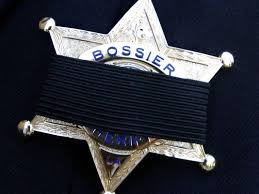 On Oct. 1, 1961, Congress authorized President John F. Kennedy to designate May 15 as Peace Officers Memorial Day and the calendar week in which it falls, as National Police Week. Then, in 1962, President Kennedy made the proclamation setting this week aside to honor and remember local, state, and federal law enforcement officers who have lost their lives in the line of duty for the safety and protection of others.

Bossier Parish was established in 1843, and throughout its history, there have been six officers killed in the line of duty. The first recorded death of an on-duty officer was in 1905, when Constable and Deputy Sheriff Thomas William Isaac Heath drowned in Bodcau Bayou, at Calico crossing on his way to serve papers on Thur., Oct. 5, 1905. The bayou was about 12 feet deep, and it was reported that an eyewitness, who was fishing some distance from where he was crossing, stated that he saw him fall from his horse. Heath was 43 years old.

Yarborough was a native of Bossier City, and his son Col. Neill A. Yarborough, who was only ten years old when he lost his father, authored the book History of Bossier City, Louisiana From the Early Years (1833-2006). His book is available for checking out at any Bossier Parish Library (once open back to the public), and copies are available for purchase at the BPL History Center.

The Bossier City Police Department was formed in 1949 and has lost three officers while on duty. First was 23-year-old Patrol Officer Kenneth F. Roy, whose watch ended on Sun., Jul. 12, 1970, when he was killed in an auto accident while responding to a call. Officer Roy had been on the job for two and one-half years.

The second was Patrol Officer Clyde Warren “Hoppy” Pearson, who was only 22-years-old and had been on the job for fourteen months when he was shot and killed on Sun., Dec. 17, 1972. He had been a Bossier City resident for nine years.

The last officer to die in the line of duty was 27-year-old Patrol Officer Trey Michael Hutchison, who met his untimely death on Wed., Aug. 1, 2004, only 11 months after joining the department. He began his career in law enforcement with the Lufkin Texas Police Dept., and after five- and one-half years there, he returned home to work for the Bossier City Police Dept. Working in law enforcement was a lifelong dream, and there was nothing he wanted more than to come home and work as a Bossier City Police Officer.

Vivian Eney Cross, the surviving spouse of the first line of duty fatality of a U.S. Capitol
Police Officer, proclaimed that “it’s not how these officers died that made them heroes, it’s how
they lived.”

While the BPL History Center is closed during the pandemic, our staff members are still
available to answer any research questions you may have. What do you want to know about
Bossier Parish History? Email history-center@bossierlibrary.org or call us at 318-746-7717.