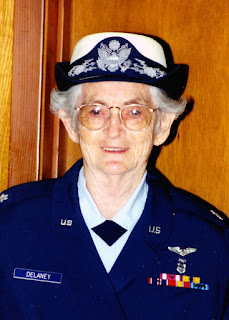 Today is National Nurses Day and the start of National Nurses Week, where we raise awareness of the contributions and vital role that nurses play in society. And, the month of May is National Military Appreciation Month. In light of these observances, this writer would like to remember Shirley Jane Cox Delaney, a nurse, a veteran, and a good neighbor.

Delaney was born in Tremont, Illinois, in 1924, and after graduating high school, in 1941, she went to nursing school. When Delany graduated as a registered nurse in 1945, she worked in Gulfport, MS, at the VA. Then in 1954, she began her career in the United States Air Force as a Lieutenant and continued her training in nursing.

In 1956, Delaney was selected for the Air Flight Training School in Montgomery, AL, where she trained and worked as a flight nurse on aeromedical evacuation missions in the Pacific Theater. Air Force aeromedical evacuation crews contributed to the decreased death rates during wartime. Her tours of duty in the Air Force took her around the world and landed her at Barksdale Air Force Base in 1973, where she served as Chief of Nursing at the BAFB Hospital.

Delaney retired from the Air Force in 1976 as a Lieutenant Colonel and remained in Bossier City until she died in 2005. During her military service, she was decorated with the National Defense Service Medal, the Outstanding Unit Citation, the Air Force Commendation Medal, and the Meritorious Service Medal.

As a Bossier City resident, she always looked for ways to serve others. She was awarded the Shreveport Journal’s “Good Neighbor of the Week” award, Oct. 16, 1979, based on the following nomination sent in by one of her neighbors.

“I would like to nominate Mrs. Delaney who is a retired Lt. Col. From Barksdale Air Force Base.

“She takes care of everyone’s pets, plants and mail while they are away on vacation. She even left food and soft drinks in my refrigerator so that we would have something to eat on our return home.

“She is always taking people places or doing something they need done. She came to my house and trimmed the grass around the house while my husband was out of town.

“She is also a registered nurse and she can be counted upon to help with all medical problems. Her concern is greatly appreciated by everyone.

“She never misses birthdays or Christmas. She always tries to make these days special for friends and neighbors alike.

“She is always sharing with her neighbors – fresh strawberries, peaches, tomatoes or a jar of homemade jelly.

“Although Mrs. Delaney is busy with her own life (which includes taking care of her elderly mother) she always has time for her neighbors.

“Her mother, Mrs. Cox, is also to be commended. Although she can’t get around very well, she is an excellent cook and all the neighbors have benefited from their combined talents.

“They are not only good neighbors, but great friends.”

Delaney also served as a community educator, assisted with community outreach, and she served on the state board of the Louisiana Division of the American Cancer Society. She was an active member of the Bossier Kiwanis Club, where she participated in the awards program and assisted in handing out more than 8,000 achievement awards each year to students in 13 elementary schools in Bossier City. And she was instrumental in the success of the annual Kiwanis golf tournaments.

With it being the centennial anniversary of women’s right to vote, it deserves mentioning that Delaney believed in a person’s right to vote, and she exercised her right to vote during every election. So, it will be no surprise to learn that she also worked at the voter polls for several years.

While the BPL History Center is closed during the pandemic, our staff members are still available to answer any research questions you may have. What do you want to know about Bossier Parish History? Email history-center@bossierlibrary.org or call us at 318-746-7717.

In honor of National Nurses Day and week, a special thanks go out to all of our dedicated nurses, past and present, THANK YOU!