In 1993 the “Historic Sites” signs project was started by the Highland Area Partnership, under the leadership of Director Robert J. Marak. After having great success, the project expanded to include Caddo Parish and Bossier Parish, with a focus on the two cities, Shreveport and Bossier City. A large group of organizations and individuals joined forces, including historians Eric J. Brock and Clifton D. Cardin. Of the 150 sites selected throughout the two parishes, the group received permissions to install 132 historic site signs.
The following is a partial list of the historic site markers and their descriptions, that were placed in Bossier Parish through this project, along with their description.

Scopena Plantation - “One of the oldest operating plantations in Northwest Louisiana. Established on a land grant from the period of French domination. In recent times was childhood home of Louisiana Gov. Charles “Buddy” Roemer, who was born nearby.”

Red River Ferry Boats - “The Don Juan and Sterling White ferry boats crossed foot and stock traffic to Shreveport from near this point for many years prior to the opening of the first bridge across Red River in July 1884. Prior to this, beginning in the 1840s, another ferry crossed the river about four blocks north of Texas Street.”

Oakland Plantation - “This house was built in stages between 1832 and 1848, and by 1850 was owned by Doctor Abel Skannal. From this house the family controlled five plantations totaling over 8,000 acres. Rumors about ghosts are sustained by the fact that Doc Skannal kept a coffin in the attic of the house. The family cemetery is located nearby in the woods.”

Hughes House - “Built in circa 1840 by Alex B. Hughes, the house remained in the Hughes family until its donation to the Bossier Restoration Foundation in 1972. This was the boyhood home of William Clark Hughes who was Speaker of the Louisiana House of Representatives in 1928. This House has been used as an office, home, schoolhouse and museum.”

Elysian Grove Plantation - “Near this location, during the greater part of the 19th century, stood  “Elysian Grove” plantation, owned by Mary Cane (1812-1902). Mrs. Cane was a prominent businesswoman and landowner in Bossier and Caddo Parishes. After her death the main house  deteriorated and was finally razed in the 1920s.” 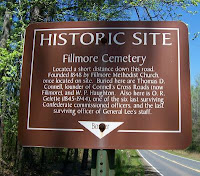 Paul Lawrence Home - “Built 1883 after earlier house on site burned. Residence of Dr. Paul Lawrence, respected physician, who performed house calls for over 50 years despite the loss of a leg in the Civil War. Haughton was originally called Lawrenceville in his honor.”

The Old Bossier City Municipal Building - “Cornerstone laid Nov. 16, 1926. Officially dedicated My 19,1927. A fine example of the Spanish “Hacienda” style adapted for public buildings. The second floor still contains original jail cells.” The building originally housed the city offices, mayor, police and others. The building is still in use by the Bossier Art Council and the East Bank Theater. It also houses a very unique and interesting gallery of paintings and abstract art.

Henry McDade House - “Modified dog trot house is example of skills and creativity of early 20th century homes in Bossier Parish. It has one room on south side and three rooms on the north. Built circa 1927 by Henry McDade for his wife, Artie Lee Patterson McDade and their eight children. Over 80 descendants as of year 2000.”