Walter Hill was a Benton resident and avid outdoor sportsman who probably planned to spend his retirement hunting and fishing at the Sailes Hunting Club in Bienville Parish. On May 13, 1975, a valve on a storage tank filled with anhydrous ammonia malfunctioned while working, causing severe damage requiring 27 surgeries and four transplants. In the end, the Doctors were unable to restore Hill’s sight. Now, legally blind, he was forced into early retirement and feared that his disability would prevent the retirement he always imagined.

Hill learned that there’s not much one can’t do, where there is passion, will, and good friends. It was not long, maybe about a year or so after the accident, he began fishing again with the help of a friend, part-time fishing guide, Vardaman “Junior” Williams of Williams and Son Plant Farm in Keithville.

Ten years later, he learned that his neighbor, Margaret Stewart, loved to hunt and fish, so he made her a deal, “if you get me there, I will pay all of the expenses.” From that point forward, Hill and Stewart began “hunting” and fishing together. Though he could not hunt, he enjoyed being in the woods and sitting in the deer stand.

Over the years, Hill lost his wife, Dorothy, and eventually, he and Margaret married on Valentine’s Day 2006. As a mother of a legally blind son and an avid hunter herself, she started making phone calls when she heard of a blind person in Texas hunting using a laser sight and partner. Margaret called the Louisiana Wildlife and Fisheries to learn that, in Louisiana, this would be illegal. Next, she called Louisiana State Representative Henry Burns, a long-time friend, and resident of Haughton.

Burns went on to sponsor a bill (HB 39) through the Louisiana legislature, which was signed into law by Governor Bobby Jindal, just in time for hunting season. “The new law authorizes the use of laser scopes by visually impaired hunters while hunting with a sighted individual.” Louisiana is the 17th state to pass such a bill allowing the blind to hunt with the assistance of technology and a sighted partner.

The last time Hill shot a gun for hunting purposes was on New Year’s Day in 1975, just five and a half months before losing his sight. Finally, with the new law in place and family and friends’ help, Hill could do more than sit in the tree stand. It was the winter of 2010 when, once again, Hill experienced the thrill of hunting when he shot his first deer since becoming blind 35-years earlier. 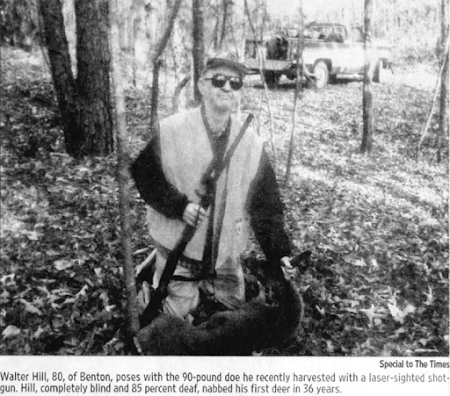 The most important message that Hill would want readers to take from this is “not to be afraid of doing things with people who are handicapped.” He did not take lightly the challenge and effort it took for his friends and family to help him fish and hunt. Hill stated, “You don’t realize how much it meant. When I caught that first bass, I almost cried. Margaret and Junior helped give me my life back.”

Learn more about the local history by visiting the Bossier Parish Libraries History Center, your leading source for local history. We are located adjacent to the Central Library branch at 2206 Beckett Street, Bossier City.

Whether you want to learn about local history or research your family history, we are here to help in person or online, www.bossierlibrary.org/research/history-genealogy. Be sure to follow us @BPLHistoryCenter on FB and check out our blog, http://bpl-hc.blogspot.com/. 318-746-7717, history-center@bossierlibrary.org