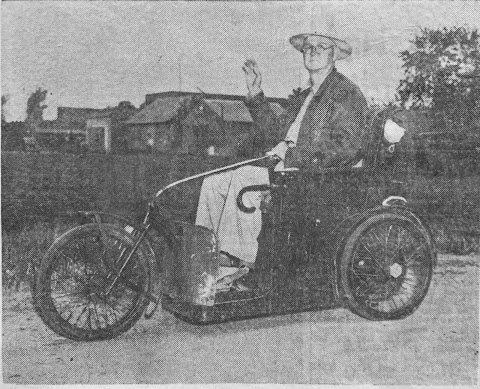 John H. Wheeler, better known as ‘Slim’ by the locals, was a native of Bossier Parish, born in 1879. He lived in Plain Dealing for the majority of his life. At the age of 19, Wheeler fought in the Spanish-American war. After the war, he made his living as a tonsorial artist, which is a fancy way of saying a barber.

He ran his shop in Plain Dealing for 27 years until he sold it in 1928 to his son Howard A. Wheeler, who began working with him several years prior. Doing so allowed him the freedom to divide his time between the tonsorial arts and performing his duties as constable.

Wheeler became paralyzed from the waist down at some point early in his life; however, it is not clear whether it was a result of being in the war or if he later became disabled. Being confined to a wheelchair did not stop him from working or from getting around town. In 1937, he purchased a motorized wheelchair so he could expand his traveling options.

The law in Plain Dealing required that he not drive his motor chair faster than 23 miles per hour in town, though his motorized wheelchair topped out at 16-miles per hour. This did not stop him from going wherever he pleased, including long-distances. His first trip was to his church in Cottage Grove, where he enjoyed the church service and dinner on the grounds. “He said in only took 50-minutes to drive from Plain Dealing to the little church.”

While Wheeler was famous around town for his mode of transportation, it would not be long before his fame spread. In 1938, he made his first long-distance trip to Lake Charles, La, to visit his sister, Mrs. George Robinson. Wheeler traveled 420-miles roundtrip starting at 8 a.m. on a Wednesday and arriving at his sister’s home at 1:45 p.m. the next afternoon. Though his chair came equipped with a light, he chose not to drive during the night hours.

His gas-powered chair got between 80 and 85 miles per gallon, and the one-horse power motor ran on one cylinder and had two speeds in drive and one speed in reverse. The chair was described as being much like a typical wheelchair in appearance for that day and time, except it had bicycle tires in place of the standard wheels, and it had a stick lever for steering, as seen on older automobiles.

It cost just over $250 in 1937, the equivalent of just over $4,500 today. In the event of rain, all Wheeler had to do was pull out his handy dandy umbrella that he kept tucked under the left armrest. He also had a small garage built at the end of his front porch to house his motorized chair. He could make the transfer from his house wheelchair to his road wheelchair unassisted.