Many believe that teaching agriculture in public schools began with the passing of the Smith-Hughes Act in 1917. However, this act's passage was the culmination of work started in 1893 by Alfred C. True, Director of the Office of Experimental Stations. The OES was established in 1888 as a special branch of the Department of Agriculture.

When True became the OES Director, his first report concluded that "the farm boy or girl in the rural high school should be taught...the theory and practices of agriculture." He believed that doing so would result in "more contented and prosperous rural communities." He continued to advocate the need for, development of, or progress in agricultural education in public schools.

At that time, states began establishing agricultural education programs, and by 1916 agriculture was being taught in over 4,000 high schools. The passage of the Smith-Hughes act in 1917 provided federal funds to states to support the teaching of vocational agriculture, home economics, and trade and industrial education. With access to funding, more schools could afford to hire vocational teachers, often referred to at that time as Smith-Hughes teachers. Ten years after the act passed, approximately 90,000 public schools were teaching agriculture.

You may be wondering what this has to do with local history. In 1926, James T. Manry of Plain Dealing took a trip to Georgia to see family and friends. He wrote about his journey for the Bossier Banner-Progress. His story included a visit to a Smith-Hughes school where he saw the community benefits of having an agricultural program in public schools. In the article, he asserts, "By all means Bossier Parish is entitled to at least two of these schools." Manry was sure that he would win his friends in Plain Dealing over to his way of thinking.

One month later, the remainder of his story about his trip to Georgia appeared in the newspaper. He mentions that a friend requested him to contact the State Agricultural Department for further information along that line, which he did. He also said, "The wonder is that every parish does not take advantage of the Government's offer and thus learn the young people to love the farm. The only reason that these schools might not be a success in every instance is in the selection of a teacher. In passing through sections where these schools are maintained one can't but help notice the improved appearance of the crops grown. With the right selection of teachers Bossier Parish can't afford to do without this aid is my humble opinion." 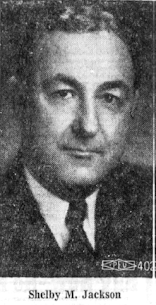 The first Smith-Hughes teacher in Bossier Parish was Shelby M. Jackson. He taught agriculture at Plain Dealing and Benton High Schools while also serving as the Smith-Hughes director of Bossier Parish. He got right to work and made it possible for local students to participate in the Smith-Hughes schools' district agricultural fair that first year. Winners were selected to attend the first national congress of vocational agricultural students for a national livestock judging contest at the American Royal Livestock and Horse Show in Kansas City.

Manry must have been satisfied with the Parish's selection of Jackson because the program was a success. Jackson not only instructed the school children, but he also taught the community through weekly articles that appeared in the Bossier Banner-Progress. In 1930, Jackson earned the distinction as the master vocational instructor for the State of Louisiana. He later became the State Supervisor of Vocational Agriculture and then State Superintendent of Education after that.

According to the Future Farmers of America website, "The advancement in agricultural education since the Smith-Hughes Act has bettered the quality of life not just for America's rural and farm families but for everyone across the globe who is fed and clothed by the American Farmer."