Each year, since 1987, March is designated as Women's History Month by Presidential proclamation to honor women's contributions to history, culture, and society. This year's theme is a continuation of 2020s, recognizing the battle for women's suffrage. For almost 100 years, women fought for the right to vote. But the right to vote is not the only thing women have had to fight for. While women continue to fight for the Equal Rights Amendment, they also continue to break barriers in many areas such as sports, politics, the military, and the workplace.

The women of Bossier Parish are no exception as we have a very long list of women who have and continue to break barriers set before them. There are so many that it is not possible to list them all here now. The following are a few of the Bossier Parish women that have broken barriers making their contributions to history, culture, and society. 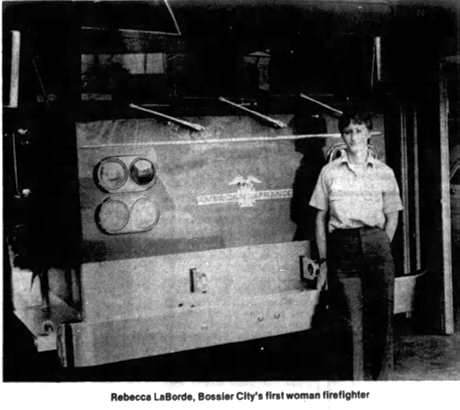 Rebecca LaBorde holds the distinction of being the first female firefighter for Bossier City, joining the department in 1984. She was the fifth woman to attempt to join the department but the first to pass all of the tests, including the agility test. She passed the test because she trained hard, running and weight training to meet the requirements. The agility test had applicants set up a ladder, climb up and down it, then dismantle it, carry two different types of hoses, and finish by carrying 100 pounds up two flights of stairs, all within a time limit.

Esther Parker Watkins became the first Bossier City Marshall when Judge Louis Lyons appointed her in 1965. Her appointment came after her husband O.L. "Slim" Watkins' sudden death. She served as his deputy during his sixteen years as City Marshall, making her the perfect fit. He was the first Marshall elected when the Bossier City/Ward two court was established in 1950. When election time came in 1966, she was elected by the people running against T. R. Kay and Arthur C. Townsend.

Bossier Parish women have also made their mark in the armed forces. Haughton native Glenda Rhodes-Hood enlisted in the Navy in 1973. There she became a lithographer, and in 1984 she became the Navy's first female chief lithographer. A lithographer is one who prints from a flat stone or metal plate, parts of which are treated to repel ink. They were the Navy's version of a Print Designer, running print shops and producing printed material used by the Navy, such as magazines, newspapers, forms, and training materials. This job no longer exists in the Navy.

In 1943 army nurse 2nd Lt. Elsie S. Ott, formerly of Barksdale Field, was the first woman to be awarded the Air Medal, awarded to members of the Army, Navy, Marine Corps, and Coast Guard for meritorious achievement while participating in an aerial flight. Ott nursed five seriously ill officers and men on the first intercontinental air evacuation flight. A 10,000-mile, six-day flight from India to Walter Reed Hospital. During that flight, she had only one corpsman to assist her. She prepared food for the entire crew, sleeping only a few moments between caring for the men and preparing the meals. Ott had never flown in an airplane before and received air evacuation training after her achievement. 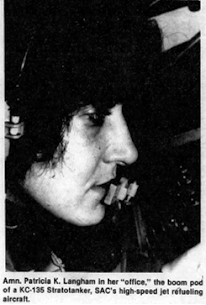 In 1979, Airman Patricia K. Langham earned the distinct honor of being the first boom operator with the 913th Air Refueling Squadron at Barksdale Air Force Base. Not only was she the first boom operator at Barksdale, but she was among the first within the Strategic Air Command and the Air Force. It was not long before she was promoted to Senior Airman, and in 1981, she made the honor roll as a distinguished graduate of the non-commissioned officer course.