“EXTRACT FROM THE RECONSTRUCTED CONSTITUTION OF THE STATE OF LOUISIANA” 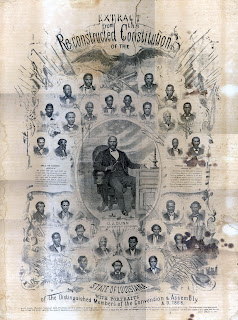 “Extract from the Reconstructed Constitution of the State of Louisiana. With Portraits of the Distinguished Members of the Convention & Assembly. A.D. 1868” is a rare lithograph poster in our collection that once hung in thousands of homes of black Louisianans. Thumbnail portraits of the black delegates to the Louisiana Constitutional Convention of 1868 surround a portrait of Louisiana’s first black Lieutenant Governor, O.J. Dunn. (Not pictured is John Pierce, representative of Bossier Parish.)

Delegates to this convention rewrote Louisiana’s Constitution during the period following the Civil War called Reconstruction. Black Louisianans were given the right to vote for delegates to the Constitutional Convention of 1868. They enthusiastically voted for almost 60 percent black delegates. The resulting Constitution gave black males the right to vote. It took away the right to vote from those who had preached or published articles against the United States or who had voted for or signed an ordinance of secession. It integrated free schools and (on paper at least) any other public places.

In the election following ratification, many of the black delegates to the constitutional convention were elected to the legislature. It was the first time blacks held public office in Louisiana. These changes did not persist. Reconstruction was over by 1877. But black leaders of the Reconstruction period, who tended to be as educated as their white counterparts, had laid down a framework for black political, economic and educational gains. Reconstruction was Louisiana’s first civil rights campaign, and of course not its last.
Posted by Pam Carter Carlisle at 9:42 AM