Photo of the Month - March 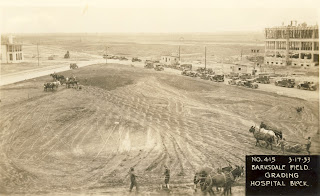 March's photo of the month is an image from the construction of Barksdale Field, taken on March 17, 1933. Teams of mules are grading the site of the future hospital.

The construction of Barksdale Field in the early 1930s was an exciting time for both Bossier City and Shreveport. Approximately 20,000 acres were purchased for the airfield. Jobs were scarce during the Great Depression, so Shreveport's mayor, J.G. Palmer, requested that contractors give preference to local labor. The Planters Press newspaper of April 30, 1931 notes that a "literal flood of money" flowed into local business channels and there were "hundreds of men employed at one thing or another on various projects related to the field".

The first nine troops arrived at Barksdale in August of 1932. Seven of the men came in planes piloted by Army Air officers, while two came in their own automobiles. In the party were seven privates and two non-commissioned officers.

February 2, 1933 saw the dedication of Barksdale Field. The City of Shreveport and the Town of Bossier City decorated their streets with "beautiful banners and flags in commemoration of the greatest event ever witnessed in this community."  The dedication ceremony began with a concert by The Standard Oil Refinery band and was followed by speeches. Then an aerial review was held with demonstrations by the attack and pursuit teams. Over 100 of the newest and most modern planes took part in flying maneuvers during the day, and the Barksdale acrobatic team performed stunts. Later that evening, a banquet was held at the Washington-Youree Hotel followed by a ball at the country club.

The Historical Center has more photos of Barksdale's construction and a small display will soon be up at our Aulds Library Branch.
Posted by Marisa Diedrich Richardson, Curator of Collections at 9:54 AM