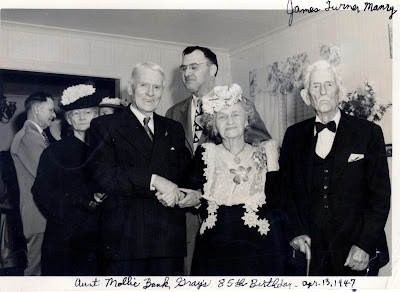 As promised in last week’s column, this is the first of a two-part article written by Rupert Peyton in appreciation to Mollie Banks Gray. It has appeared before in the Bossier Press-Tribune but reading about this wonderful woman is always fun. The article originally appeared in the Plain Dealing Progress on April 11, 1947.

“That was the year that Roosevelt the First shook his big stick, an earthquake shook San Francisco, the boll weevil crossed the Rio Grande and cotton rose to ten cents a pound. That was the year that the cyclone tore Gilliam and Bolinger to splinters, blew down Uncle Hi Simpkins’ barn, tore up Papa’s back rail fence and, incidentally killed several people. That was the year they put the mosque dome on the Plain Dealing bank, the Great Van Amburg Circus came to town, Old Man Winn got drunk and made himself a spectacle of supine inebriation on the roadside, where he was viewed with varying degrees of horror by the pious brethren and sisters of Walker’s Chapel and Old Salem.”

“That was the year I met Miss Mollie.”

“I am just one of a million persons who have met this Grand Old Lady of North Louisiana, South Arkansas and parts thereabouts, but my first meeting with Miss Mollie was a bit unusual. For the sake of the newcomers to the land of Ark-La-Tex, ‘Miss Mollie’ is none other than Mrs. Mollie Banks Gray. But if you have lived in these parts for an appreciable time you already know that. Although Mrs. Gray claims Plain Dealing as her habitat, all North Louisiana have some sort of claim to her citizenship, for she is at home in most any part of the area that she goes.”

“On that day fate brought me in contact with Miss Mollie for the first time. I was a very small boy who had come to town to purchase a brand new suit of clothes which, if the cotton crop was good enough occurred once a year about ginning time. As the boll weevil had not crossed the Smith and Wesson line from Texas, the crop that year was good enough to afford me a $3.50 hand-me-down at Mr. Frank Kirthley’s store. After I became the proud possessor of said suit, with cap to match, I had to stroll in my finery down Palmetto Avenue. (Yes, there’s a Palmetto Avenue in Plain Dealing, but nary a palmetto grows on it). I came to the site where they were building the bank. I was fascinated by the dome which was quite incongruous to the scene— Mohammedan architecture in a citadel of Baptists, Methodists and Presbyterians.”

“As I gazed upon this unusual piece of structure, two boys bent upon deviltry approached me, snatched my cap and fled. I pursued them, yelling my indignation as loudly as possible. My tormentors were having the time of their lives when suddenly a sharp command spoiled their malicious fun.”

“’Give back that boy’s cap!’ a woman’s voice rang out with authority. With a meek ‘yes, Miss Mollie,’ the lads returned my cap to me. That’s how I met Miss Mollie. My rural timidity prevented proper expression of thanks, but inside I was a very grateful boy. The years that have passed since that event have deepened my appreciation of this grand old lady and, come next Sunday, April 13, I expect to join with a throng of relatives and friends in paying homage to her on her 85th birthday. In honor of the occasion, all of Mrs. Gray’s children and grandchildren will hold open house for her at the home of her son and daughter-in-law, Mr. and Mrs. Robert H. Curry, 202 Preston Avenue, from three to five p.m. All of Mrs. Gray’s friends are invited to this informal affair. Of course, if they all come it will take special trains and buses to transport them.”

Read more about Miss Mollie in next week’s column and visit the Bossier Parish Library Historical Center to find out more about her.