History in the Name: Bossier Parish Cities and Towns

The Parish of Bossier is a medley of communities that includes two cities, three towns, two census-designated places, as well as several unincorporated communities. Names for these communities were inspired by the area’s physical features, given in memory of an early settler, or after an individual that made significant contributions to the development of that area. 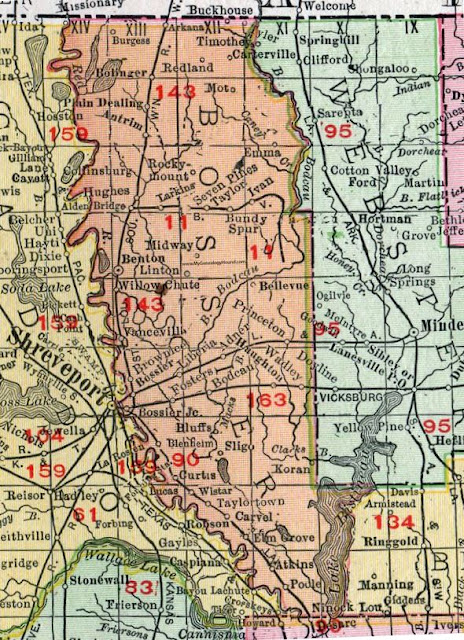 Bossier City is the highest populated municipality in the parish, and like many other communities, it has had more than one name. The first European settlers of the Bossier City area were James and Mary Cane, who had a plantation called Elysian Grove, which was about 600 acres in size. The plantation’s port or ferry landing was known as Canes Landing, and sometime after the Cane’s opened a store near the landing, the area became known as Cane City.

Near the end of the nineteenth century, a small village was laid out by Mary Cane’s granddaughter and her husband, changing the name to Bossier City. Bossier was later incorporated as a village in 1907 by Gov. Blanchard. Bossier City was named in memory of Pierre Evariste John Baptiste Bossier, the same U.S. Congressman that Bossier Parish was named after. In 1843, he was elected to represent Louisiana’s 4th District in the Twenty-Eighth Congress, the same year that Bossier Parish was created.
Shreveport is the second city that resides in Bossier Parish, but only small portions of it. It is easy to assume that the Red River perfectly divides Caddo and Bossier Parishes, and at one time, this was true. However, over time through natural and artificial causes, the course of the river has changed. The boundaries of the two parishes were designated based on how the “Old River” ran; however, the river has moved east over the years. Making it so that areas of Shreveport seem to be in Bossier and areas of Bossier seem to be in Shreveport.

The Shreveport downtown airport, Wright Island, Shreveport Aquarium, El Dorado Casino, and the Charles and Marie Hamel Memorial Park are all in Shreveport, Bossier Parish, Louisiana. Boomtown Casino is in Bossier City, Caddo Parish, as well as most of Cane’s Landing, and a portion of the eastern bank of the river south of Jimmie Davis Bridge. Therefore, parts of Shreveport are in Bossier Parish, making Shreveport the other city within the parish.

Shreveport was named in honor of Captain Henry Miller Shreve, who not only made the Red River navigable in 1838, but he also made contributions to the settlement of the region. Shreveport was first called Shreve Town after the real estate brokerage firm, Shreve Town Company, in which Captain Shreve was an owner.
There are two accounts of how the town of Benton received its name. In one account, it is said that it was initially called Ben’s Town after a merchant by the name of Benjamin Looney, who was reported as being the first merchant in the area. The other account is that the town of Benton was named in honor of Thomas Hart Benton, a United States Senator from Missouri. He played a critical role in developing the west by building roads west of the Mississippi, including the road from Arkansas into Shreveport, which passed through Lewisville, Plain Dealing, and Benton operating as a stagecoach line for many years.
The town of Haughton, which is expected to qualify to become a city after the 2020 U.S.
Census, started as Lawrenceville. When the VS&P railroad came through in 1884, the name was changed to Haughton on Sept. 1 of that year—named after one of the original settlers, William Haughton. The Lawrence’s and Haughton’s once owned all of the lands that make up Haughton today.
Before the Civil War, there was the Plain Dealing Plantation that was operated by George Gilmer. When the Shreveport and Arkansas Railroad, commonly known as the Cotton Belt Railroad, was announced to be coming through the area in 1888, S.J. Zeigler a businessman and the husband of a Gilmer descendant that owned the Plain Dealing property, selected the property to establish a village. It was briefly known as Guernshein after a prominent railroad company stockholder, but it was soon renamed to Plain Dealing after the plantation. It was chartered in 1890 and became incorporated as a town in 1928.

To learn more about these and other communities in Bossier Parish, visit the Bossier Parish Libraries History Center at 2206 Beckett Street, Bossier City.

Posted by Amy Robertson at 8:00 AM