The Christmas Spirit of 1949

1949 was an exciting time to be in Bossier City at Christmas time. The Bossier Chamber of Commerce sponsored the first parish-wide Christmas tree gala. The local retail merchants' committee of the Bossier Chamber of Commerce arranged for colorful lighting that was installed on Traffic Street from the old post office to Barksdale Boulevard, and on Barksdale Boulevard from Traffic Street to Bennett Street. The newspapers called it "Bossier City's most elaborate display of the Christmas Spirit."

Local merchants financed the affair, and civic organizations and citizens sent donations to provide presents for the children. Original plans for the gala called for an outdoor celebration on the property that belonged to Cecil Woodward in the 700-block of Barksdale Boulevard. It is there that a 12-foot Christmas tree was set-up for the occasion. When inclement weather threatened the festivities, the Christmas tree was relocated to the Bossier High School auditorium, where a crowd of about 650 people gathered to enjoy the Christmas festivities.

After a brief welcome statement from the Bossier Chamber President, D.L. Patrick, clowns and a group of "talented fun-provokers" entertained the crowd. The Bossier High School's 85-piece band played several Christmas carols and other numbers. An 80-voice choir in several selections accompanied the band. The audience joined in the singing of "Silent Night" and "Jingle Bells." 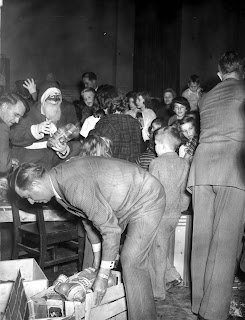 The most welcome guest to attend the Bossier Christmas party was Santa Claus, with all of the merriment he brings. According to an article in the Bossier Banner, "When he appeared near the end of an hour long program in the Bossier high school auditorium, he was greeted with shrieks and yells from more than 200 children. He gave each of them a bag of fruit, nuts, candy and toys."

This gala, like so many holiday events, was about community and giving. This event is one example of how local clubs and organizations work together with the community to provide holiday cheer for all. That same year, the Bossier City Lions Club promoted a Christmas Joy Fund in its third year. 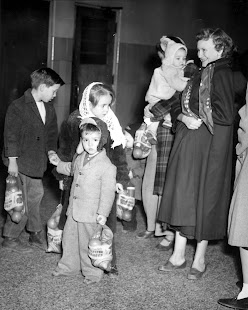 In an article in The Planters Press, it was made clear that "Although inaugurated by the local Lions club the Joy Fund is not the fund of any particular group. It belongs to all the citizens as co-sponsors. All clubs and organizations and all citizens are invited to take part." That year many groups and citizens played a vital role in collecting donations for the fund.The Bossier High School band members had "tag days" in the downtown shopping area, and they had their annual school concert in which they charged one article of food or clothing for admission. The Red River Motor Company contributed to the transportation of the food and clothing to the distribution center.

The Bossier City Mothers Club surveyed the needs of those less fortunate and prepared the packages of holiday cheer for delivery. Men of various local clubs, including the Lions Club, assisted in distributing the Christmas goods. During that time, the fund raised about $600 every Christmas season, which would be a little over $6500 today. All excess funds remaining at the end of any given year were kept in this "sacred fund" to use the following year.

Various groups have sponsored funds, such as the Bossier City Christmas Joy Fund, for over a century in this Parish. After all, Christmas is a time for giving. May you all have a joyous holiday season.

To learn more about local clubs and organizations, visit the Bossier Parish Libraries History Center at 2206 Beckett Street, Bossier City. Questions, call 318-746-7717 or email us at history-center@bossierlibrary.org. Be sure to follow us @BPLHistoryCenter on FB.